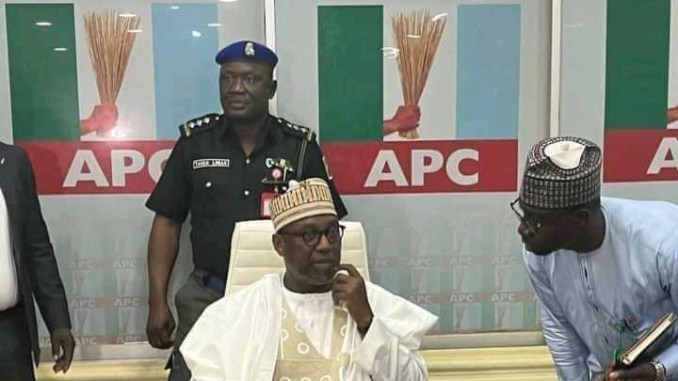 The last may not have been heard about the protracted leadership crisis in the ruling All Progressive Congress (APC) as the Governor of Niger State, Abubakar Sani Bello on Monday replaced Governor Mai Mala Buni as the Caretaker National Chairman of the party.

Akéde reports that Governor Bello arrived the National Headquarters of the APC at Blantyre Street, Zone 4 District in Wuse, Abuja at about 12 noon on Monday to take over the running of the party as a Sole Administrator based on reports in the media that President Muhammadu Buhari has ordered the sack of the Mai Mala Buni-led Caretaker Extraordinary Convention Planning Committee.

Governor Sani Bello upon arrival at APC National Headquarters parked his car at the official parking lot reserved for the APC National Chairman at the secretariat and headed straight to the Office of the Party Chairman located upstairs of the party building where he was received by party officials.

The Niger Governor also went into a closed door meeting with members of the APC Caretaker Committee and is scheduled to hold another meeting with APC state chairmen who had been waiting inside the party secretariat before his arrival.

The APC Secretariat had since 7am been besieged by policemen who barricaded both entrances into the APC National Secretariat with stern looking policemen preventing entrance into the secretariat except for key party officers.

No less than 15 patrol vehicles of security operatives cordoned off access roads to the party secretariat with over 70 armed operatives around the Blantyre Street in the Zone 4 District in Wuse Abuja.

Earlier in the day, the interim secretary of the APC, Senator John Akpanudoedehe had in a statement described as fake news that the Mai Mala Buni-led Caretaker Committee had been sacked.