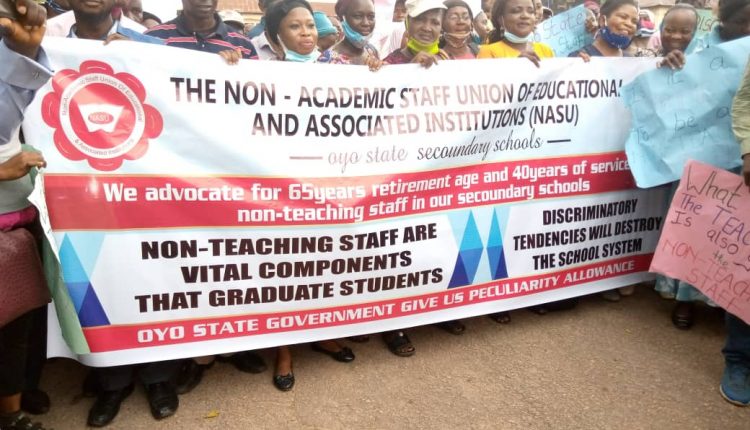 The None Academic Staff Union of Educational And Associated Institution (NASU), Oyo state chapter has protested against the Federal Government (FG) policy on service years and retirement age which the union described as discriminatory and undeserved denial of their rights.

The Union State Secretary, Comrade Folorunso Olubunmi, while speaking on Monday 22 of March, during the protest at the governor’s office, explained that President Buhari had in his address on year 2020 World Teachers Day approved 40 years as the new service years as against the initial 35 years for all teaching staffs in secondary Schools and colleges in Nigeria.

5th October is World Teachers Day set aside globally to celebrate teachers across the world who have chosen teaching as their profession.

The Nigerian government has announced a special salary scale for teachers while also increasing the years of service from 35 years to 40 years in a bid to motivate teachers.

During a ceremony marking the World Teachers Day on Monday, Nigerian President Muhammadu Buhari announced this gift to teachers across the country in a speech presented by the Minister of Education Adamu Adamu.

Buhari said the move is in recognition of the roles of teachers in nation-building and to encourage them in delivering better service.

The new approvals include a special salary scale for teachers in basic and secondary schools, automatic employment for graduates from universities and colleges of education, building of low-cost housing for teachers in rural areas, increasing service for teachers from 35 years to 40 years and among others.

On the same occasion, Minister of State for Education Chukuemeka Nwajuiba identified the teaching profession as the greatest profession in the world which must be accorded adequate recognition and respect.

He said having a day to celebrate the teacher is just but a token gesture of recognition to the sacrificial contribution of teachers.

Speaking further, Oyo state chapter of NASU explained that the President also extended retirement age from 60 to 65 years for teachers across all secondary and colleges for same category of workers.

They alleged that such policy was discriminatory as it was not a crime for any worker in the academic environment to decide not to become a teaching staff but rather non teaching worker.

The union noted that since the President gave the new approval in his last world teachers’ day address, only workers in the teaching line have been enjoying benefits of the new FG approval.

“Even after they are through with their education and about to graduate, the last person they will see is still the none academic staff, we then wonder why all these incentives will be given to teachers alone.

“I can decide to go to the university and chose not to go the teaching line, is it a crime, even with my Masters, should I be denied any opportunity or incentives.

The union expressed it’s confidence and faith in the Seyi Makinde led administration’s commitments to workers welfare without discrimination stressing that the protest had nothing to do with the state government but federal government policy as it affects teachers and none teachers alike.

The union however, delivered a message to the federal government through the Oyo state government, the letter which was received by Comrade Bayo Titilola Sodo, Special Assistant on Labour Matters to Governor Seyi Makinde.

Speaking on behalf of Oyo state government, the Special Assistant to Governor Seyi Makinde, Comrade Bayo Titilola Sodo, commended the union for their comportment and courage.

He however, assured that the message which is expected to the be delivered to the President through the state governor will be duly delivered and in a timely manner.