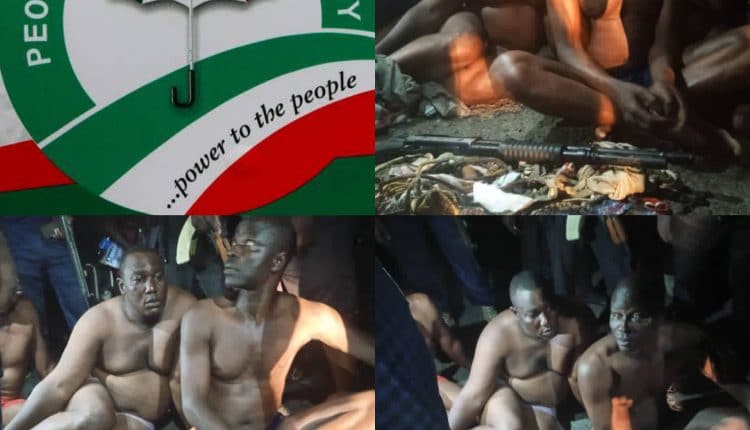 Men of the Security Joint Taskforce have arrested some armed Thugs in Osogbo, the state Capital of Osun State.

The Armed thugs who were have arrested in Oshogbo, the venue of the People’s Democratic Party (PDP) South West Zonal Congress, on plan to disrupt the party’s zonal congress.

The gang leader who was identified as Mr. Tiri Olowoposi and another know as 50litres and many other were apprehended with series of arms and ammunitions to Mar the process of electing a zonal exco for the party.

The hoodlums were arrested by men of Joint Task Force Of police and Civil Defence at the hotel occupied by one of the Oyo State PDP Stalwart, Chief Bisi Olopoeyan.

Our reporter confirm to Akéde Ọ̀yọ́ that when interrogated they revealed that their plan was to distrupt the process of the election.

They further fingered Alhaji Adebisi Olopoeyan as their sponsor, who hired them to come to the venue of the south West PDP Zonal Congress, with the aim of causing mayhem, and distrupting the process.

The men of the security joint taskforce took them away from the venue, and more Security personnel were deployed to forestall any henious plan by any group or individual to distrupt the South West PDP Zonal elections, set to commence tomorrow.