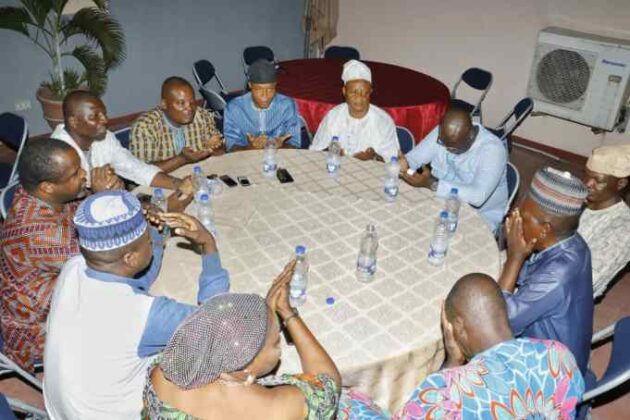 JUST IN: We Did Not Endorse Adelabu Penkelemes For 2023 – Embattled ALGON Denies Fake Report

The Chairman of the embattled Association of Local Government of Nigeria (ALGON) Oyo state chapter, Prince Abass Aleshinloye, has debunked an online newspaper report that the Association has endorsed Chief Adebayo Adelabu Penkelemes as its 2023 governorship candidate on the platform of the All Progressives Congress (APC).

The embattled ALGON made this disclosure on Monday 19th April, in a press release signed by its chairman, Prince Abass Aleshinloye, and made available to newsmen.

According to the release, individual’s actions and inactions cannot be said to be the official position of the Association.

AKÉDE Ọ̀YỌ́ gathered that the 2019 governorship candidate of APC in Oyo State, Chief Adebayo Adelabu, on April 15 2021, hosted members of the embattled ALGON where Mr Adeyinka Adeyemi of Ajorosun LCDA and Mr Arowomole of Lagelu LGA declared that the body is committed to supporting the aspiration of Adelabu to occupy the number one position in Oyo state come 2023.

Prince Aleshinloye in his reaction on behalf of the Association maintained that individual Chairman is entitled to his democratic choice and interest as a politician.

He added that there was nothing bad in honouring invitation from party members.

The statement reads” “MY ATTENTION HAS BEEN DRAWN TO A RECENT ONLINE PUBLICATION IN WHICH OYO ALGON WAS SAID TO HAVE ENDORSED A PARTICULAR CANDIDATE.

“THIS IS NOT TRUE AS INDIVIDUAL INTEREST CANNOT BE ASCRIBED TO BE THE OFFICIAL POSITION OF ALGON AS A BODY.

“THERE IS NOTHING BAD IN HONOURING INVITATION FROM ANY PARTY MEMBER/LEADER, BUT THERE IS NEED TO BE CAREFUL NOT TO BE QUOTED OUT OF CONTEXT AT THIS PERIOD.

“THE ACTION OF THE JOURNALIST TO MISREPRESENT THE OPINION OF INDIVIDUAL CHAIRMAN OR SOME CHAIRMEN ATTENDING A PROGRAMME TO BE THE OFFICIAL POSITION OF ALGON AS A BODY, IS UNFAIR AND CONDEMNABLE . ONCE AGAIN, ALGON HAS NOT ENDORSED ANY POLITICIAN FOR ANY POLITICAL OFFICE, MORE SO, INEC HAS NOT ISSUED A TIME TABLE FOR POLITICAL ACTIVITIES AND OUR PARTY, APC HAS ALSO NOT DONE SO.”