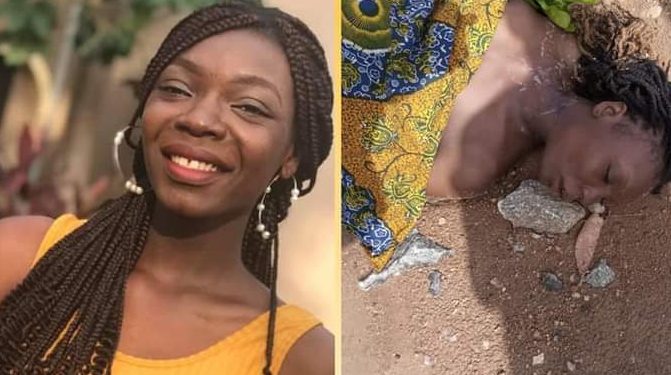 The remains of Blessing Otunla, an indigene of Oyo state and a graduate of English from the University of Abuja (UniAbuja) has been found in the drain.

The deceased was in the nation’s capital from Oyo State to sort her certificate and transcript of results.

Her naked corpse was discovered at the weekend in a drain at Iddo Sarki village, Airport Road. She was reportedly raped and killed.

AkédeỌ̀yọ́.comp gathered that she hailed from Irawo in Atisbo local government area of Oyo state but reside in Saki.

With the hashtag #JusticeForOtunlaBlessing, Friends, colleagues and other well-meaning Nigerians have been calling for justice and investigation into the killing of the Late Blessing.

Meanwhile, the Federal Capital Territory Police Command has launched an investigation into the murder of Otunla Blessing, a recent graduate of the University of Abuja, who was killed by unknown assailants.

This was made known in a statement made available to newsmen by the Command’s spokesperson, Yusuf Mariam, on Monday.

According to her, the commissioner of police, Bala Ciroma ordered a full-scale investigation into the incident and launched a manhunt for the perpetrators.

The statement read, “The FCT Police Command condemns in totality the murder of one Blessing Otunla a former student of the University of Abuja, whose body was found along Iddo Village axis and was killed by unknown assailants.

“Consequently, the Commissioner of Police CP. Bala Ciroma has ordered a full-scale investigation into the unfortunate incident and launched a manhunt for the perpetrators while commiserating with the family of the deceased.

‘History Won’t Be Kind To You’, Ilana Oodua Tackles Tinubu, Others For Opposing Yoruba Nation