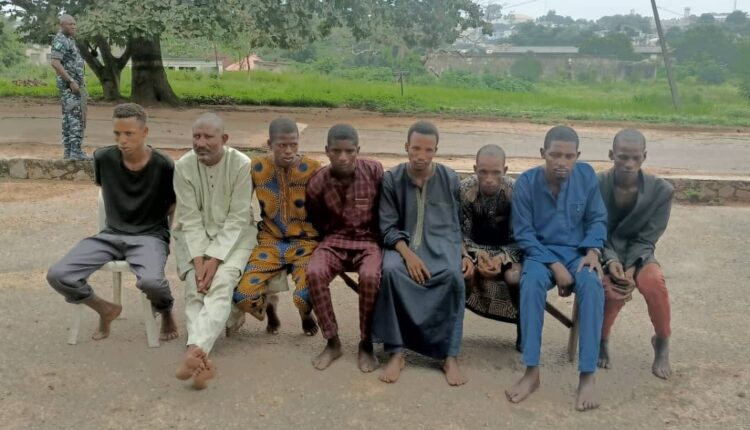 The Seriki Fulani of Ogbomosoland, Alhaji Umar Guruma, has revealed how the Oyo State Police Command did a “shoddy job” by parading the men they paraded on Friday as perpetrators of the abduction of late ex-governor Alao-Akala’s farm supervisor, Christopher Bakare, and of the owner of a private hospital in Gbede, Abdulrasheed Oladoye, in Jabata and Gbede respectively, both in Surulere Local Government.

Recall that eight men (all Fulani) were paraded by the police in connection with the separate incidents along with nine others alleged of commiting similar offences in some parts of Oke-Ogun area of Oyo State on Friday.

However, Alhaji Guruma noted in an interview with an Ogbomoso news platform that what the police did was tantamount to overzealousness.

Claiming to have the facts of the arrest, he accused the police, “You did not arrest these people, some of them are our people including my elder brother. Our people wrote down the names of some of them, which were submitted to you so you can investigate them and second day you went to parade them as criminals who perpetrated the abductions. It is not genuine, it is not real.”

He disclosed that as Fulani people, they did not like the spate of kidnappings in the zone or anywhere, while stating that: “When these happened our people began discrete investigations leading to compilation of names of some suspects, informing their vigilante group.

“There are three prime suspects, who are now at large – they are Aiki, Busari and Mama-G. They lived in Gbede-Jabata axis.

“Aiki was in fact brought before Sarkin Fulani Igbon, who has his house on Jabataland, for interrogation, but the Seriki was sloppy and the man escaped from him. That landed him in trouble and that was why he was picked up by the police instead.

“About four others were handed over in similar circumstances these are some of the people paraded.

“On Tuesday, the OC Monitoring and Head of Anti-Kidnapping Squad called me that the name of my elder brother – Umar Abubakar – was also submitted. But my brother was not even in Ogbomoso, he was in Ogun State at the time being a truck apprentice.

“I told my mum about it and we called him that they mentioned his name in connection with kidnapping. He said never and so, we advised him to come back so that he could be investigated and got his name cleared.

“And he came. If he is guilty he would have fled. I do not dispute that he could be stubborn when he is drunk but outside that he behaves himself well. He is not a criminal. I took him to the police myself. Second day they went to parade him as a kidnapper. Sarkin Fulani Gbede also personally took his son to the police after his name was mentioned. His son (Mustapha Buguma) agreed that he should be investigated.

“Don’t forget l said three were actually real suspects, but they had escaped and were actually given out by our people. So, the police now arrested Sarkin Fulani Igbon (Aliu Jafaru) in place of Aiki, and the fathers of Busari and Mama-G in their places, but they went to parade them as criminals. It’s not genuine, let’s be realistic,” he lamented.

When asked why the people suspected Aiki and the two others, he remarked that: “About three days to the Jabata kidnapping, he (Aiki) was seen with some four strange men mounting bags at their backs in the area. If they have nothing to hide they would not have run away, they would have submitted themselves for investigations like my brother and others.”

Guruma, who was installed following the death of his father recently now stressed that his life is now in danger because those guys might be targeting him.

He appealed to security agents to conduct thorough investigations of those in their custody and go after the real suspects.

He added: “These men they paraded, there are no confessional statements extracted from them, no witness pointed accusing fingers at them, no one saw them committing the crime, and no victim identified them but if they are identified by the victims no problem it is between them and God.

“Meanwhile, there is one Anjola Abubakar, that one had earlier been arrested, he is a worker in Akala’s farm at Jabata. They said he is an indigenised Fulani. I must say also that some Yoruba men might be involved because only an insider knows the grave of a blind man”, he stated.

In the meatime, as if to prove the Sarkin’s claim, another kidnap incident occured the day after the men were handed over to the police.

Perhaps the real criminals were laughing heartily when the parade of the suspects took place on Friday.