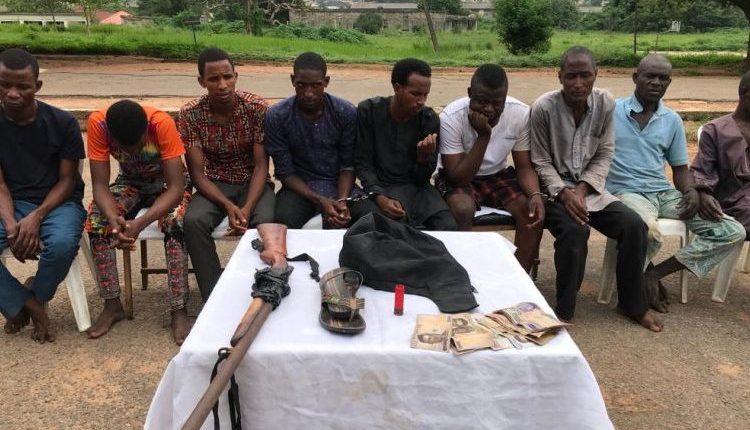 Reports reaching Oyoaffairs have it that there is tension in Gbede area of Ogbomoso town, as some residents are planning to attack the Fulanis in the community, following the recent abductions.

Gbede is situated in Surulere Local Government area of Oyo State, near Ogbomoso along Ilorin road.

Recall that a private hospital owner, Abdurasheed Oladoye was kidnapped last week in his hospital in Gbede, and was released after alleged payment of N3m ransom.

According to residents, other abductions have occurred in that part of Surulere Local Government and gone unreported.

However, a feeling of triumph overwhelmed the people after the parade of eight Fulani herders as suspects responsible for kidnappings in the community.

The residents were reportedly angry at the sight of the suspects and are said to be planning to attack Fulani settlements (Gaa) in the vicinity to vent their anger in view of the trauma they have been subjected to.

Alhaji Gurma posited that if it is allowed to occur it might lead to dire consequences revealing that most of those paraded were handed over to security forces themselves for investigations and not that police arrested them on their own.

“We heard that the people of Gbede are planning to invade Fulani settlements in the area to vent their anger against our people. As Fulani people we do not like what is happening and it is us that handed over the suspects to the police for investigations. Nothing has been proved against any of them. So, to now conclude you will visit mayhem on us because of this is uncalled for. It is misapplication of justice.”

Gurma added that his people might be forced to defend themselves, as they have nowhere to run to.

“Most of us were born here in Ogbomoso and Ogbomoso is our home, we have nowhere to run to. We will have to defend ourselves to death if attacked. We are not criminals even though there might be black sheep among us.”

The Sarkin further disclosed that he had called security agents to talk to those planning to attack his people and pleaded that police should be allowed to do their work and establish the case against the suspects.

When contacted, Baale Gbede, Chief Subaru Akano Nurudeen, disclosed he had heard about it but that he had appealed for calm among his people.

“I told them they should let security agents do their work, that they shouldn’t take laws into their hands. They would listen to me”, he stated.

A resident who is among those riled up reportedly lamented: “How can we accommodate people and they will turn around to be harming us. They destroy our farms with their cows and still act impudent when we express displeasure. To now be kidnapping us is a bitter pill to swallow.”

As at press time, security agents have been alerted of the looming crisis.