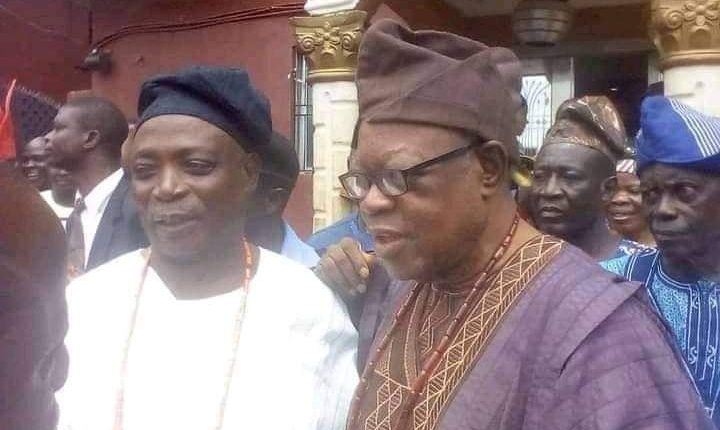 Ladoja To Balogun: Why I Can’t Come To Your House Now• We Will Withdraw The Case Instituted By Myself And Other Crowned Obas Against Makinde And You—Balogun

According to the Nigerian Tribune, Chief Lekan Balogun has been calling Ladoja by phone and they have been having what has been described as fruitful discussions. The move is aimed at bringing down the tension created over the heated controversy trailing the filling of the vacant Olubadan stool.

A source privy to the telephone conversations of the two senior chiefs said Balogun called Ladoja on Wednesday and Thursday to discuss how to end the succession controversy.

Ladoja, the source said, told Balogun it was not he that the Otun Olubadan should appeal to as he did not institute the cases that may stall the process of selecting the next Olubadan.

Balogun, in response, was said to have assured Ladoja that the cases he and other high chiefs who were crowned obas instituted against the state governor and Ladoja would be withdrawn. “It is in your own interest to go and withdraw the case. If not, the governor may be obliged to wait until the case is determined by court.

“So, as it is now, it is between us and the governor. It has nothing to do with any third party. I warned you from the time Abiola Ajimobi started the whole thing. I said ‘egbon, don’t destroy the stool you intend to sit on.’

“So, ask your lawyers and [Michael] Lana to meet and discuss if you truly want to withdraw the cases. It is God who enthrones whoever He likes as Olubadan.

“The meeting you held at Mapo Hall was not Olubadan- in-Council meeting. You called me and said you wanted to hold a press conference and I said I would attend. But I am happy I did not attend when I saw how the meeting turned out,” Ladoja was quoted to have said. It was gathered that a request from Balogun to have a meeting with Ladoja at the former’s house was turned down by the latter over security concerns.

Ladoja was quoted to have said, “egbon, I will not come to your house now because of ignorant people that are milling around. I can get there now and they can get violent.”

When Balogun assured Ladoja on adequate security, the former governor was said to have insisted he would not go to Balogun’s house, for now, saying, “egbon, there is no way you can guarantee that one. It is unwarranted tension that your people are creating in Ibadan.”

Meanwhile, the Central Council of Ibadan Indigenes (CCII) has waded into the matter with a view to dousing the rising tension generated by the succession battle.

It was gathered that CCII President-General, Prince Oluyemisi Adeaga, on Friday, led other members of the council to a closed-door meeting with Ladoja at his Bodija residence.

In a telephone interview, Adeaga confirmed that the umbrella body for all Ibadan sons and daughters has ntervened to put an end to the “needless heating up of the city.”

“Yes, we have asked all Ibadan indigenes to henceforth stop discussing the matter publicly. I can assure you there is no fight between the two elders. They are communicating very effectively.

“People are only escalating it. It is even culturally wrong to be discussing succession to the Olubadan throne when we have not even concluded the fridau prayers for Oba Saliu Adetunji who joined his ancestors.

“People just heated up the city unnecessarily. Nobody is ambitious to usurp anybody’s position. Someone only critically looked at the circumstance and gave a piece of advice.

“Time is not ripe to talk about succession. The spirit of Ibadan is always there to help us settle any dispute that may arise. But I can assure you there is no dispute anywhere,” he said.