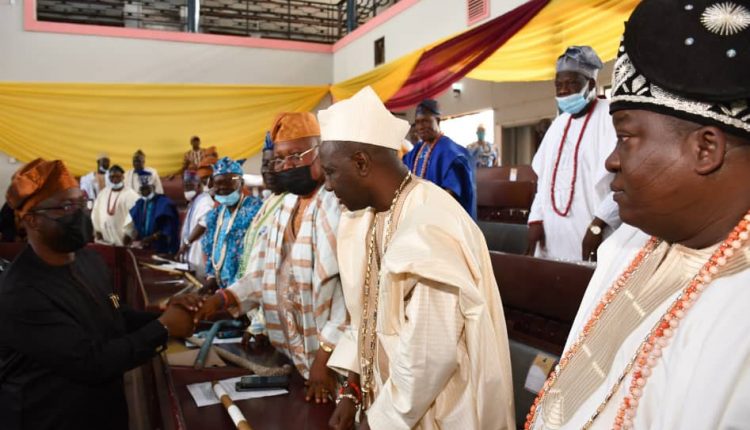 Governor Seyi Makinde of Oyo State has warned traditional rulers and community leaders against involvement in land grabbing as anyone caught would be made to face the wrath of law.

The Governor gave the warning on Friday at a stakeholders meeting with all the 33 Local Government Chairmen, traditional rulers and heads of all security agencies in the state,held at House of Chiefs, Parliament Building, Secretariat, Ibadan.

The governor read the riot act to land grabbers and some chiefs are said to be aiding their operations, insisting that his government will deal decisively with anyone found guilty of abetting crime.

He noted that while his administration continues to protect the interest of everybody, he however warned that Oyo will not allow security situations in other states to have a place in Oyo state. His words:

“From our analysis, the land grabbers are working majorly with our traditional rulers.

” We sent some people to Akinyele, the policemen that came with the land grabbers were covering their identities and when we investigated, we noticed that the Baale in that area has a link with the people that came.”

Speaking further, Makinde lauded all security service chiefs and traditional institutions in the state for their cooperation which has brought Oyo to the point where others states are asking why the state is stable security wise.

In his goodwill message, the Alaafin of Oyo, His Imperial Majesty, Oba Lamidi Adeyemi 111 commended Governor Makinde for the relative peace being witnessed in the state. He added that the traditional institutions are collaborating with all security agencies to arrest criminals terrorizing some communities in the state.

The event had in attendance top government functionaries, notable traditional rulers, all Local Government chairmen and Vice-chairmen, heads of all security agencies in the state.