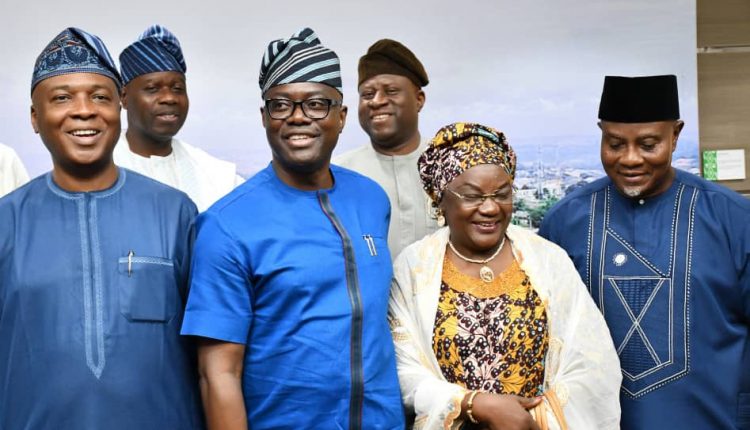 Oyo State Governor, ‘Seyi Makinde, said on Tuesday that he has no doubt that the Peoples Democratic Party (PDP) would get its act right and present a presidential candidate that will win the Presidency and salvage the country from the throes of economic woes and insecurity.

He added that the country has had a lot of issues under the APC government and that it was time Nigerians rejected the party, saying there is need for decency in government.

The governor stated these while hosting the former governor of Kwara State and former Senate President, Dr. Abubakar Bukola Saraki, who was in Ibadan to meet with PDP delegates ahead of the party’s National Convention slated for later in the month.

A statement by Mr. Taiwo Adisa, Chief Press Secretary to Governor Makinde, quoted the governor as saying that the PDP Convention is an avenue for the party to take a serious decision for itself and the country and that he was confident that the party would get it right.

Makinde, who described Saraki as a good presidential material that has a clear understanding of the issues of government, said the least of the PDP presidential aspirants is better than the best APC has to offer.

He said: “I want to welcome you again to Ibadan. I am glad for one thing – if we take you anywhere in the world, you are presidential material. You have a clear understanding of the issues of government.

“Some believe that in PDP, the least of our aspirants is better than the best APC wants to offer.

“In the next 10 days, we have to take a very serious decision for our party and the country as well. I don’t have any doubt that we will get it right this time around.

“They say 24 hours is a long time in politics. So, we have to keep striving, pulling everybody together such that we are able to narrow the field and go to the presidential convention as a united family.”

Speaking further, the governor berated the APC-controlled National Assembly for making laws that make the electoral process unstable, saying he hoped that President Muhammadu Buhari would assent to the latest amendment to ensure that statutory delegates vote in party primaries, before the commencement of the House of Assembly primaries.

“You mentioned that I am a super-delegate to the convention but that may not be with the situation that the APC National Assembly has put us into. They have modified the Electoral Act, sent it to the president and I am not aware that the President has assented to that. And if it is not assented to, even the president himself, all the governors and all those claiming they are statutory delegates will not be able to vote.

“That is the implication of what they have done. We may have a situation whereby the presidential candidate will be determined by only the elected national delegates; only 774 throughout this country.

“We also have the issue of section 84(12). They got a judgment in Abia, which has been set aside, and the Attorney General of the Federation has, again, gone to the Supreme Court for an interpretation. Is it a conflict between the Federal Government and the states?

“So, we have a lot of issues with this APC contraption and Nigerians had better look and say ‘no more.’ We need decency in government. Most of these things are pretty straightforward but why are they giving the entire country a runaround? Why are they deliberately making the electoral process unstable?”

Speaking earlier, Dr. Saraki said Nigeria is in its defining moment and that it needs a president that has knowledge of the issue, can be a team player and can connect with the youths and bring to bear the private sector experience.

The former Senate President explained that he represents the kind of president that Nigeria needs at this moment, having gained experience in the private sector and also served in government at both executive and legislative arms, rising to become chairman of the Nigeria Governors’ Forum and Senate President.

Saraki said: “Your Excellency, I thank you for making time because I know this is a very busy day for you. You were at the programme with the pensioners and you are going to commission a project today.

“I don’t have much to say here because by your pedigree, by your background, by your capacity and knowledge, based on where you come from; the private sector, you understand the issues; you know we are in a defining moment in this country. You know that this country now requires a particular type of leadership.

“We don’t have the luxury of saying he is my brother, he is my friend, he is my sister. There are certain things we must see in a person and I have confidence in you because I know your capacity and the people of Oyo state are benefiting from it. When you came in, they did not give you much of a chance saying you were coming from the private sector but see what you have done to the state.

“So if you look at all the aspirants and ask who is closer to you the way you are? Who has come from the private sector like you? Who has the knowledge of the issues at hand? To lead this country, you must also be a team player because the country is so disunited. To lead this country, as they say, you must be a bridge across the North and South because all these talks in the party about zoning; let it go to the North or South, now the party has thrown it open, who best fits that the North and South will not feel they have lost out?

“I believe I best represent that person. The youth that represent over 70 per cent of our population are yearning for a person that they can connect with and that is why they are connecting with you in Oyo state. Let us have a president like you, that can also connect with the youth at the national level.

“Today we see issues of religion across the country. Let us have somebody again that separates between the Christians and the Muslims so that there is unity in this country. You know Your Excellency, being a Governor in the last four years, the revenues in the country have dropped so badly. A government that is spending over 80 per cent to service loans cannot bring infrastructural development.”