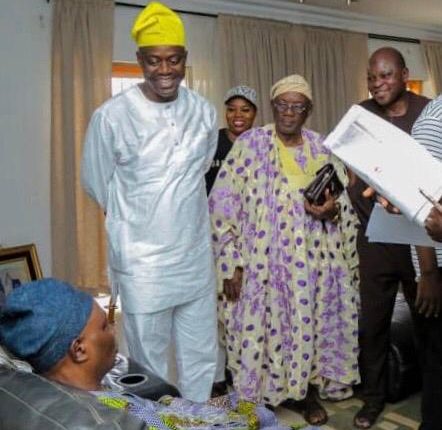 A leader of the Peoples Democratic Party, PDP, in Oyo State, Wole Oyelese, has begged Rashidi Ladoja, a former governor on the platform of the party against joining the opposition All Progressives Congress, APC.

Oyelese, in a statement made available to this Newspaper, He said the PDP is a better option for Zenith Labour Party, ZLP, members led by the former governor.

This newspaper had reported how the governorship candidate of the ZLP and other top members of the party met the leadership of the APC. Few days after, suspended chairman of the party, Wole Abisoye, also led some members to Makinde.

Recall that ZLP secretary, Bimbo Adepoju, in an interview with with a radio station over the weekend, berated Makinde for not being gentlemanly. Makinde, according to Adepoju, met the suspended chair of the party minutes after postponing his earlier meeting with Ladoja.

But Oyelese, in a statement titled: Let’s Rebuild Our Political Edifice, asked Ladoja to come rebuild the party he and others brought to the state in the build up to the 2003election.

I received with a lot of concern the news that the ZLP midwifed by Senator Rasidi Adewolu Ladoja in Oyo State is moving into the APC. This I find intriguing because many political observers see it as a move towards a deep blue sea that can swallow any giant and end up being a terrible political misadventure.

I still don’t believe that Senator Ladoja will ever gravitate towards the APC given the characters that populate the party in Oyo state and what they stand for. They can never successfully co-habit as they are simply incompatible no matter from which angle the matter is viewed.

I wish to quickly remind our former governor as to the genesis of the PDP in Oyo State and the great role he played alongside some of us to make the party stand despite all oppositions we encountered then. It is unfortunate that strange characters who do not and cannot appreciate the true beauty and greatness of the PDP have found their ways into the top echelons of the party.

This however should not discourage one from ensuring that the edifice we sacrificed to build stands even more strongly to continue to fight for the masses. There is no doubt that some leaders have been annoyed out of the party at one time or another and some are still aggrieved by the activities of the selfish characters and usurpers who were nowhere when we brought the party. They are today harvesting the fruits of the efforts we the Founding Fathers put in, yet it is my belief that we must not allow the party to flounder and be destroyed. We should bring back the good old days and make the PDP a formidable platform to bequeath to generations of Democrats to come.

If I have to take the former Governor down memory lane, I wish to remind him of the threats we received in the early days from really powerful people in the country in order for the PDP not to survive in Oyo State and by extension the South West. If we were not perturbed at that time, I don’t think it is now that some political minions will annoy any one of us out of the edifice we built. Let’s once again make the party an inclusive train it was designed to be and not a limited liability company some people are attempting to make it at this time.

It is on record that our refusal to be frightened to join the AD (Alliance for Democracy) and our steadfastness eventually saw you as Governor of Oyo State on the platform of the PDP. The circumstances that led you to give life to Accord Party and eventually the Zenith Labour Party have all since disappeared from our political firmanent and it is now time to move ahead with the PDP. I doubt if your effort in brokering the alliance that brought the PDP back into power in 2019 can be dismissed with a wave of the hand.
I am glad that you reportedly testified that the activities of the government of Governor Seyi Makinde are bringing your dreams into reality. If this is truly so as I believe it is, then the logical step would be to come fully on board the platform jointly built by us and compatriots like Chief Kolapo Isola, Dr Dejo Raimi, Chief Yekini Adeojo and some others and not pitching your camp with the APC. The emergency but politically expedient alliance formed in 2019 was to dislodge the APC for very good reasons and God made it a reality. Therefore, regardless of whatever could now be the lapses as regards the agreement of the alliance which was a baby of the moment at that time, the PDP is still a better option for the ZLP than the APC and we can make the PDP the party to beat under a properly structured agreement.

Since neither of us is any more interested in elective office, I suggest you allow your structure to fully come back into the PDP and let us support our Political Son Seyi Makinde who is currently doing well to even excel. By doing this, we will definitely be leaving behind a good political legacy worthy of emulation. The PDP for now remains the party to beat in Oyo State and we can help to ensure the continuity of the PDP administration in the state.

I have no doubt in my mind that if you allow the Homecoming, many original leaders and members of the PDP now in other parties or sitting on the fence will surely come back. This step will also go a long way to stabilize the PDP in the South West.

I call on Governor Seyi Makinde to join hands and do his utmost to ensure that Senator Ladoja comes back on board to contribute his quota to make PDP even stronger. There are certainly some comic characters in the party who will not like to see the likes of the former Governor back as they may fear losing their perceived exalted position or control of the party but the truth is that none of them can do for the party what Senator Ladoja and some other alienated leaders are capable of doing. I wish to let Governor Makinde know that achieving this feat will end up being a big feather on his already big cap and will ensure easy electoral victory for the party in future elections.

Olopoeyan Is Just Been A “Political Biggot”, Who Wants To Eats His Cake And Have It Back— Bankole