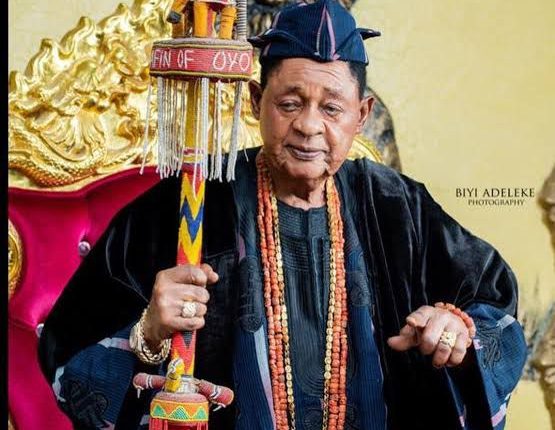 “Let’s Unite To Save Nigeria from Disintegration” – Alaafin Charges Nigerians

Oba Lamidi Adeyemi III, the Alaafin of Oyo, yesterday, called for peace among Nigerians regardless of ethnic groups, political affiliations, and religious denominations.

Speaking during the groundbreaking ceremony of a mosque in Ibadan as well as the inauguration of a 35 classroom project at the Royal Gold Model Group of Schools, the Alaafin said Nigerians should learn from the past mistakes of leaders who toed the tribalism and religious intolerance path.

He sued for peace among warring parties and advocated for unity because, for him, war and disunity benefit no one.

According to Oba Adeyemi III “There is need to unite to save Nigeria from disintegration because if we fall, we fall together and if we rise, we rise together”.

The Alaafin further added ” I don’t think that dividing this country is the way out. I believe restructuring the nation is a better option because a well-structured State will help in bringing peace and harmony to the displeased parties in the country as well as the innocent citizenry that doesn’t even understand the politics that are played by some elites “.

He pleaded with Nigerians to let things that have happened before now, go and then look forward and work towards a better Nigeria.

Meanwhile, the Alaafin during his speech, spoke in glowing terms about Alhaji Taofeek Akewugbagold, the proprietor of Royal Gold Model Group of Schools as he described him as a man of peace who is contributing in his capacity to promote peace and unity among Nigerians in his space of authority.

Apart from the Alaafin of Oyo, the inauguration and groundbreaking event had other notable names in Oyo State in attendance and they included, the Chief Imam of Ibadanland, Sheikh AddulGaniyu Agbotomokekere, Olubadan of Ibadanland, Oba Saliu Adetunji, who was ably represented by Mogaji Akere, Yeyelua Agbesinga, Alhaja Medinat Adedibu, Moshood Gbolagade and a host of others.

Why Oyo/Osun Zone Should Not Produce PDP Chairman —Olabode George