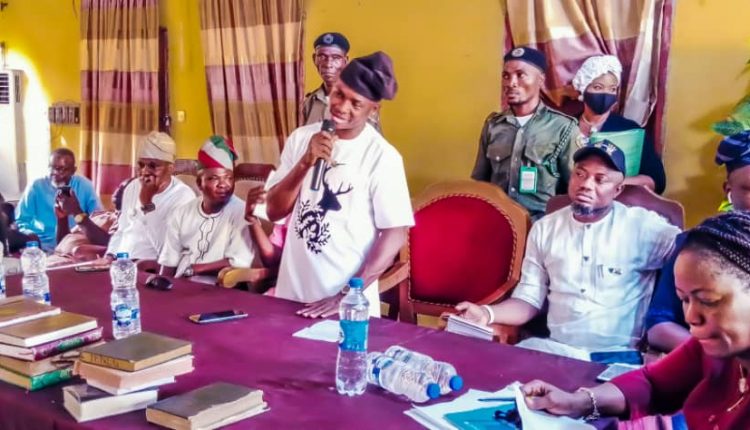 The executive chairman of ibadan North Local Government on Monday swore in new members of his cabinet, demanding from them nothing but the best.

“Given the cosmopolitan nature of our dear local government and the peculiar challenges of a front-runner local government, we cannot afford to rely on the status quo approach to providing solution to new and emerging issues.

This was contained in a press release by the special adviser on media and publicity to the executive chairman, Mr. Bodija Akinwale reads;

“As you settle down to your new assignments, I demand nothing but the best from you,” Agba Egba told the new cabinet members.

The swear-In ceremony had the twelve Special Assistants and 12 Supervisory Councilors sworn in earlier today.

The Ibadan north council boss charged them to, as a matter of necessity, adopt new methods to achieve greater efficiency and increased productivity.

The chairman told the new appointees to immediately hit the ground running and bring themselves up to speed with the mandate of their respective portfolios, as well as key into the immediate priority of the executive governor of Oyo state, Engr. Seyi Makinde.

“This, however, does not preclude the initiation of new projects that are considered highly essential and critical to the general well-being of our people in Ibadan north local government.

“We are committed to sustaining this goodwill by upholding our policy of inclusion and implementing programs and projects that will positively and directly impact on the livelihood of all our people,” he said.

Agba Egbe said that one of the approaches of this administration had been to infuse innovation and creativity into governance.

He said the appointment of the executive members was made to be in tune with the pace and set goals of this administration in reinvigorating and energizing government machinery.

He also commended the Ibadan North local government legislative arm for ensuring due diligence and speedy confirmation process for the members of the cabinet.

Hon Ibrahim, on behalf of the appointees, assuered that they would key into the vision and mission of the present government.