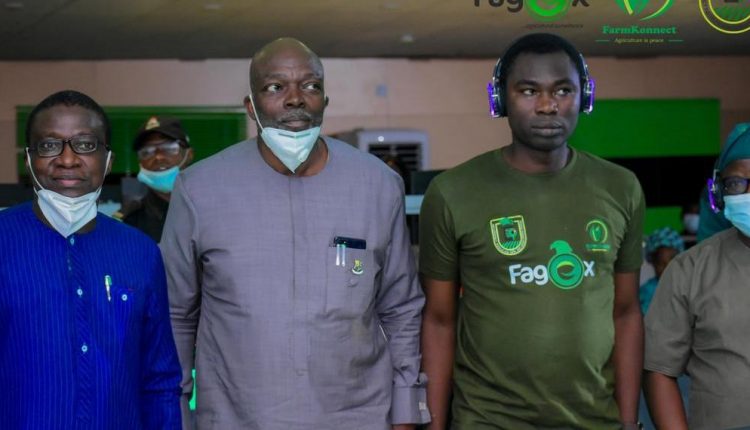 The event which took place at Basorun area of Ibadan had lots of dignitaries in and outside the state in attendance, amongst which was the Chief of Staff to Governor Makinde, Chief Bisi Ilaka; the Director General, Oyo State Agribusiness Development Agency, Dr Debo Akande; Ekiti state Commissioner for Agriculture, Osun state Commissioner for Agriculture, representatives of the Federal Government, Bank Officials, Investors and other well-wishers.

Makinde while speaking through his Chief of Staff, Chief Bisi Ilaka commended Farmkonnect for bringing such an innovation that will change the face of Agriculture in the country and Africa as a whole to Oyo state.

Ilaka noted that the state government is working tirelessly to revive the Agric sector, having strong belief that when fully harnessed and utilize can spike up the state economy and also provide millions of gainful employment opportunities to the youths in the state.

“We are the pace setter state, we are supposed to be home of new ideas, we expect our space to be dynamic, innovative. We want new ideas that can flourish in the state

“We hope a lot of people can emulate, replicate and build on this wonderful initiative.

“Things don’t happen accidentally, this is happening because of the kind of leadership we have in the State. This is going to be the beginning, similar things to emerge in the pace setter state. We are opening up the Agric space, we are redefining the space, this is where the redefinition will happen in the south west of the country.

“If we do the same thing the way we have done in the past, we will continue to get the same result, so if we want to get different result, we have to do it differently, and that’s what we want to do in Oyo state.”

Also speaking, the Director-General, Oyo State Agri-business Development Agency, Dr. Debo Akande who also congratuted Farmkonnect for the great achievement further explained that the state governor in its efforts to reposition and rejuvenate the Agric sector has chosen agriculture and agribusiness as priority for the state, adding that soon the state will experience a positive explosion of the sector .

“The governor has chosen agriculture and agribusiness as priority for the state, and by virtue of that, he has put in place the right type of policy. We are developing infrastructure across the state, and this is driving more of the private sector to come to the state to invest in agricultural area.

The Director South West, Federal Ministry of Agriculture, Dr. Marcus Ogunbiyi, who was also overwhelmed at the twenty first century innovation, assured the management of FarmKonnect that the Federal Government will continue to provide a conducive environment for private sector to thrive, adding that a report of the event will be presented to the Honorable mister for Agriculture.

He said both have the specific goal to provide input services to stakeholders in the agricultural value chains through information technology, training, research and business/professional consulting.

Saheed noted that the initiative was an integral part of its mission to glamourize agricultural practices in Africa, adding that it would contribute to food security and nutrition through agricultural real estate of modern technologies and methodologies.

Speaking further on the importance of food security to national development and peace, he said “food security is the fundamental of every security, if there is food insecurity, people will automatically go into crime, when there is scarcity, there will be conflicts and that is just the father of war”.

He further adviced that government should guide the food industry and also come up with policies that will provide food security just like the oil and gas sector.

Video: ‘How Baba Ijesha Licked, Pressed My Daughter’s Bre@sts And Rubbed Her Gen!tal For 30 Mins’, Princess Speaks In New Video

MAY DAY: ASUU to Buhari: Nigerians Enduring “Double Portion Of Corruption And Insecurity