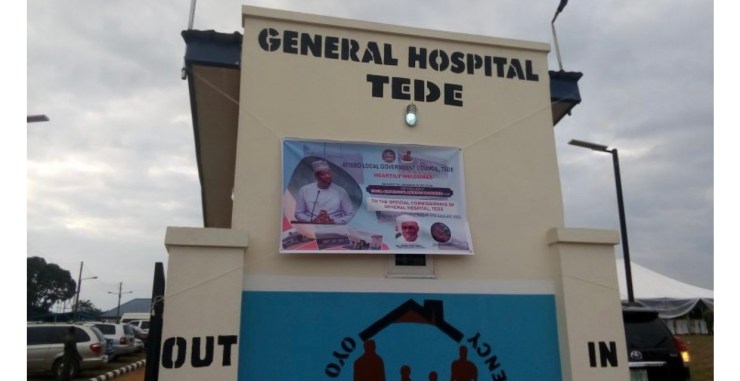 Makinde, who had earlier commissioned First Cassava-based SORBITOL Factory, which is first in Africa, Nigeria and second in the world at Alayide Village, off Ado Awaye, Iseyin Local Government, arrived the Venue of the ceremony around 6pm on Thursday.

He was welcomed by mammoth crowd including teachers, children, artisans, State Security outfit—Amotekun, party loyalists and supporters who trooped out to take a glimpse of the Governor.

One of the representative of Omo Ilu, Tede, who spoke at the event expressed his appreciation to the governor for being thoughtful of the dilapidated building.

“There has not been any sitting Governor who paid attention to the Hospital and welfare of workers let alone commissioning than His Excellency, Governor Seyi Makinde”

“We are promising you that one good tenure deserves another.”

He concluded by appealing to the Governor to also resuscitate Broadcasting Corporation of Oyo State BCOs at Oje Owode which according to him, will boost the economy of the state.

In her submission, a 200 level student who spoke with Newsmen shortly after the program, Miss Faith Oyeladun, said she has not seen any Governor who has performed creditably well like this before like Governor Seyi Makinde in the aspect of infrastructural development.

She said: “Governor Seyi Makinde did not only renovated and equipped our General Hospital in Tede, but also make my movement easy to school (Eksu, Emmanuel Alayande College of Education) by constructing Shaki and Odo-Ogun Iseyin to Oyo town”

“Makinde also make education free and accessible to the poorest of the poor house hold, as well as paying teachers salary and other civil servants on 25th of every month.

“I am praying to God to continue to be with him”, she said.

Earlier in his remarks, the Governor of Oyo State, Seyi Makinde, who was in company of his Deputy, Barrister Adebayo Abdul-raheem Lawal said health is one of the four cardinal points agenda of this present administration as contained in his Roadmap to Accelerated Development 2019-2023.