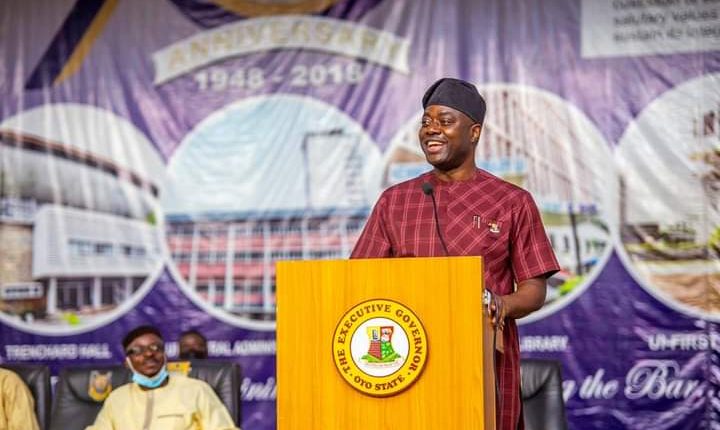 Makinde Denies Decamping To APC, Say’s Rumours Was Laughable, Lie From The Pit of Hell

The Oyo Governor Engr Seyi Makinde has denies claims from the Opposition that he’s near decamping to the Opposition Party in the State, All Progressive Congress (APC).

In a report by an online newspaper BOWA MEDIA, narrates in an exclusive chat with a top Aid to the governor, who Debunk the rumours as lie from the pit of hell and false.

“With the recent news flying around on the decamping of his Exellency Gov. Seyi Makinde to the All Progressive Party (APC)”

“According to a top aide of the governor who does not want his names in print, told this online newspaper in a telephone conversation on Thursday”.

The source explained that the claim in some quarters that Engr. Makinde had concluded arrangements to embrace the All Progressives Congress (APC), was false and self-serving.

“Someone of the status and pedigree of Governor Makinde can never join already sunk APC. Nobody is struggling steering with him as governor and leader of the PDP not only in Oyo State but also in the Southwest” he said.

He said, statements being made by members of Oyo APC to the effect that Makinde was not qualified to join the party, was therefore laughable, unthinkable and mischievous.

We had, in the past few weeks, reported that Chief Press Secretary to Governor Makinde, Mr. Taiwo Adisa disclaimed that his principal was making moves to join the opposition party, rather it is Oyo State APC that is making moves to bring the governor to their party and abandon the PDP which brought him to power.

The CPS added that Makinde has not bothered to respond to the speculative defection because he is focused on service delivery to the people.

Why I Won’t Contest Any Elective Office In 2023 — Lanlehin