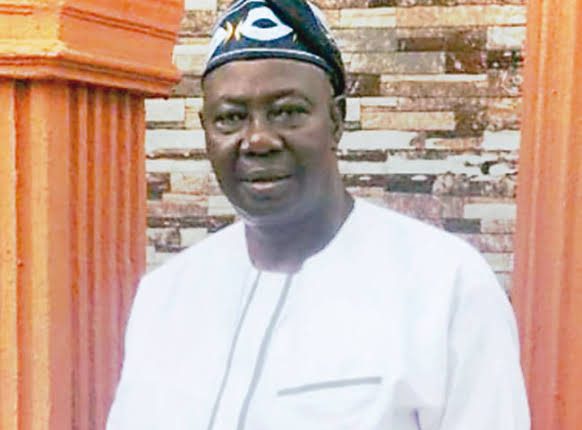 Makinde Directed Me To Invite 3 Aggrieved Leaders To A Dinner But…. – Oyo PDP Chair, Ogungbenro Opens Up

The Chairman, People’s Democratic Party (PDP) Oyo State chapter yesterday opened up on efforts and overtures being made by Governor Seyi Makinde to bring aggrieved members of the party to a round table of discussion with the view to ending the cold war between the members and the state Governor. According to him teo of the three he was directed by Governor Makinde to invite to a private dinner were diplomatic in their responses but one brutally denounced the invitation.

It will be recalled that some of the members of the ruling party who became aggrievd and pitched a separate political tent away from Seyi Makinde’s camp have been at loggerhead with the number citizen and had on different occasions accused the Governor of running a one man show by sidelining them and abandoning those who worked for his 2019 electoral victory at the guber poll.

The Oyo state Chairman of the PDP, Dayo Ogungbenro yesterday however, boasted about the performance and acceptability of the PDP led government by the people of the state declaring that the main opposition party in the state, the All Progressives Congress (APC) “has gone on a long political voyage and can not return anytime soon” while urging the aggrieved members to return home in the spirit of peace.

Addressing newsmen at the Molete, PDP Secretariat in Ibadan on Tuesday December 23, the State chairman of the party, Dayo Ogungbenro who bragged about the PDP led government in the state state added that APC in the state has already been rejected by the people because of what he described as monumental failure during the opposition party’s administration between 2011 and 2019.

“We were at a stakeholders meeting sometime ago maybe a month or so, at the Government and the Governor said publicly that he was going to recognize only one person because he is the leader of the PDP in the state, which is me as the state party chairman, and everybody clapped but we all know who is actually the leader except we wanted to deceive ourselves.

“During my acceptance speech on the day we were elected at Adamasingba stadium, I appealed to all aggrieved members and their sentiments to come back to the party, I appealed to others too who are not yet members to come on board and you will remember that when the leader of our party and the Government, Engr Seyi Makinde, took the microphone, he repeated the same thing.

“Publicly on Sunday at the Arcade in front of Government House, the Governor said he is ready to welcome everybody and those who felt aggrieved should please come back that we shall sort things out. It was then he appealed to their sentiments, even APC members to come on board. That is government and appointment is continious, yours can come three months, mine can come six months. The Governor is at liberty to appoint even till the last day he is leaving office.

“So, whoever is aggrieved because of that should know the possibility is there for him or her to still be engaged but what I said and I want to repeat here is that respect begets respect. Let me give you an example, oga (governor) give me an instruction to call some persons to a dinner I won’t mention the name. About three of them, he gave me specifically their names that I should invite them.

“I invited them. I felt they must hear my voice, I wanted to go down to their houses then I gave a call, two of them were diplomatic in their responses. One just brutally denounced me and I had to swallow my pride and that is the pride of leadership. What else do you want this Governor to do? I have given a corollary the other time. You know a sitting Governor should be treated with courtesy even both Holy books of Bible and Quran say give honour to whom it is due. So, there’s need for respect.

“Let me remind you, even when Bukola Saraki came, that is the Chairman of the national reconciliation committee of PDP, and the two sides were at the same meeting the so called aggrieved people, the Governor of the state, other leaders of thought of the party, after all said and done and they gave their own breakdown Saraki stood up and said ‘we shall appeal’.

“Look at that word, we shall appeal, to the Governor, pele na l’ako o l’abo (there’s moderation to sentiments) I rest my case for now.

Speaking further, Ogungbenro said he has been given a mandate by the Executive Governor of the state, Seyi Makinde, who he said remains the unarguable leader of PDP in not only Oyo state but the whole of the Southwest Nigeria, to raise the bar of the party’s image assuring that the ruling party will continue to sustain the mutual relationship with the press as partners in progress.

“One journalist asked me about APC, he said what is my comment about APC in Oyo state, well, I said for the benefit of doubt, I’ve had occasions to say this and I’m repeating here for the purpose of emphasis that APC is long gone on a political voyage and they’re not likely returning very soon. If they’re returning at all, it is not 2023, not 2027.” Ogungbenro said.

The state chairman of the ruling party added that his team of state excos and other local government party executives will double their efforts in ensuring that the people sustain the love and affection towards the PDP and the PDP led government in the state under the leadership of Seyi Makinde.

Ogungbenro maintained that even though there is a concept of party supremacy in a presidential system of government, he noted that the government becomes the pillar of any political party ones birthed stressing that Governor Makinde by reason of being the head of government in the state and the highest elective office holder on the platform of the party in the entire southwest remains unarguably the leader of the party in the whole of Yorubaland urging the aggrieved members to treat Governor Makinde with courtesy in their expression of sentiments.

He also urged the press to play the role of a watchdog via effective news reports and calling the attention of either the party or government to any issues needing government attention. He appealed to the newsmen to remain apolitical even in their close dealings with politicians in the state stressing that politicians, government, political parties, and the press are all partners in progress in the business of nation building.

“Where you need to call us to attention, please call on us, where you need to criticize constructively for the purpose of corrections please do, and my office is open to you pressmen working in Oyo state and I think together we shall go miles as partners in progress.” He said