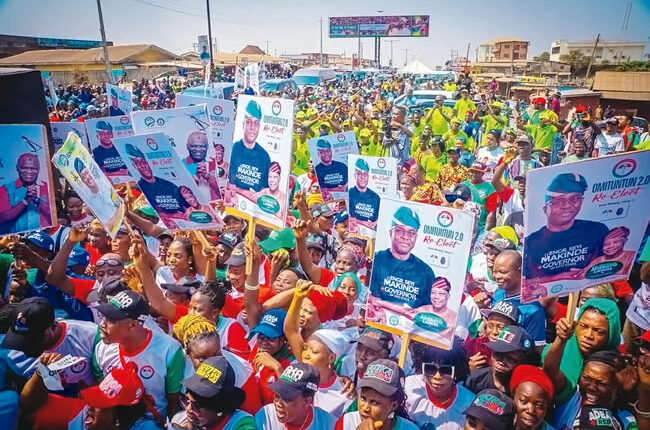 THERE is a reason Governor Seyi Makinde’s ongoing campaigns across Oyo State have become more like a festival, with people trooping out in unprecedentedly large numbers and getting ‘lost’ in song and dance: his personality and record of performance. As an administrator, Makinde has approached the business of governing Oyo State with utmost humility, fellow feeling, and abiding concern for the electorate, particularly those trapped in horrendous economic conditions by decades of misrule. Rather than lecturing people about his place as the constituted authority in Oyo State, he keeps winning the people over with his congenial and decent conduct. That is why he is being honoured without demanding for it; he was recently garlanded by Oyo students as Nigeria’s first Deserving Authority. A climate of calm pervades Oyo State—so resolutely does Makinde abhor tempest– as the people’s governor springs one infrastructures surprise after another.

This week, there was a carnival when Makinde and his team landed in Akinyele local government area of the state, with the people expressing firm resolve to keep the governor in office. An excited Makinde remarked: “Our people in Akinyele LGA are solidly behind us and looking forward to Omituntun 2.0. The outlook for Akinyele is very bright with Ilutuntun Business District, the Dry Port and the Special Agro-Industrial Processing Zone (SAPZ) coming on board under Omituntun 2.0.” The itinerary included visits to Christian and Muslim leaders, and to Obas and Chiefs led by Kabiyesi Onijaiye, Oba Lasisi Akano, as well as the Seriki of Sasa, Alhaji Haruna Maiyasin Katsina. For the governor, the visit was particularly nostalgic, as this was the spot where, in 2019, he took the decision to cancel the N3,000 education levy imposed by the Abiola Ajimobi administration when he saw children sent home for non-payment. That decision returned over 54,000 children back to school.

He was in Egbeda Local Government Area on Friday. Before Friday, he was  in several other places harvesting a huge support from an appreciative electorate.

Campaigning across Iware, Jobele, Ilora, Aawe, Fiditi and parts of Lagelu local government area, the governor met ecstatic crowds, promising to do much more for them in his second term. In Lalupon, he promised to revive notable industries such as the Nigerian Gas Cylinder, Exide Battery and Leyland, while also attending to concerns by traditional rulers. His key message to the people: whatever good development they had seen “is little compared to what is coming under Omituntun 2.0.” The message was the same as the team toured Oyedeji, Oja Olorunda, Igbo Elerin, Baale Ojurin and Akobo campaign points. Representatives of the traditional council, religious and community leaders commended Governor Makinde for being a listening governor, pledging to work for the success of his second term bid.

When the man fondly referred to as GSM/Seyi speaks, humility sallies forth, yet he leaves no one in doubt about his firm resolve to lift millions out of the morass of poverty. Apparently, unlike many a governor in this clime, he detests the deployment of cant, clownishness and verbal salvos as articles of governance. He is measured in speech and temperament, and points to the bigger picture when many cannot avoid allowing their emotions to boil over. Consider just how, within a short period, he doused the conflagration that was about to engulf Oyo State over the Ibadan obaship tussle, and how he resolved the LAUTECH issue to the delight of commentators home and abroad. Of course he is not perfect, but his ability to apologise and make corrections when he is wrong on any issue, and to govern without pretending to have infinite knowledge, continue to raise his stock among not just the Oyo electorate but Nigerians in general. Go to social media and see people wishing that Makinde were their own state governor! He is that loved.

The excitement about Makinde is not just because of roads, including the 65-kilometre Moniya-Iseyin Road, the Idi Ape-Basorun-Akobo Road with the new General Gas Flyover, the ongoing Saki-Ogbooro-Igboho Road; the ongoing first phase of Ibadan Circular Road; the 12-kilometre Apata-Benbo-Jankata Road; the Apete-Awotan-Akufo Road; Eruwa-Lanlate-Maya Road, etc. The real gist is that the massive road work across the state is giving vent to the projected industrial yield: The brand new 76-kilometre Ogbomoso-Iseyin Road has now attracted the Brent Sugar Plantation and Factory, a multi-billion naira project. And with the Oyo-Iseyin road and the upgrade of Fashola Farm Settlement to an Agribusiness Hub has come Friesland WAMCO, a major milk producer. There is of course the Psaltery International’s Sorbitol Plant, the second of its kind in the world.

And where are Makinde’s challengers?

During political campaign seasons, it is usual for the electorate to be talking of different political actors, what they are promising and how their background justifies or nullifies those promises. In Oyo State at the moment, however, there is any hardly any talk of other candidates apart from the sitting governor and Peoples Democratic Party (PDP) candidate. The refrain, from Ibadan to Ogbomoso and from Iseyin to Igboho, is “Omititun ti take over.” (Omititun has taken over). Omititun, meaning fresh water, is the catchphrase of the Makinde campaign, but it has become something of a political anthem among the Oyo electorate who are apparently resolved to repeat the massive victory they gave the governor four years ago. Makinde’s soaring popularity notwithstanding, it is important to ask why his co-contenders, silent and seeking a shortcut to power, are not even making any effort to be heard by the Oyo electorate. The voters are asking that question.

One plausible reason is the realisation of certain defeat, and it’s not difficult to unpack. For one, the major opposition parties in the state are being widely panned by the electorate for putting forward severely limited candidates. Speaking during a radio programme, one of the candidates angling to take over the Agodi Government House declared, quite unabashedly, that he would convert the ultramodern motor parks built by Governor Makinde in Challenge, Ojoo and Iwo Road to libraries! The implication, namely that Oyo State does not need bus terminals, that bus drivers should return to the roads, causing traffic chaos and orchestrating accidents, is quite asinine, and the people took notice.

This same radio campaigner declared unabashedly that the police were complaining of neglect in Oyo State because more money was being used to fund Amotekun. He did not mention that Makinde had given at least 110 operational vehicles to the police, a federal agency, while upgrading their communications system. As if to show the man’s utter hollowness, at the handing over of 10 additional operational vehicles to the Oyo State Command, the Commissioner of Police, Mr Adebowale Williams, had stated that Governor Makinde had been paying a monthly stipend to widows of policemen killed during the #EndSARS protest, and to DPOs and senior management cadre of the police, while providing fuel support and repairing Armoured Personnel Carriers! The opposition man claimed that teachers, who had been receiving their salaries on the 25th of every month and getting their 13th month salaries since Makinde came on board, were complaining. But this was just after the governor received the Golden Prize for Teachers Award. The people wisely dismissed him as a clown.

The other candidate, noted for unbridled arrogance and vile talk, is even more pathetic.

To make matters worse, while proclaiming that Makinde’s prompt payment of salaries and pensions “is not an achievement”, this opposition candidate failed to explain why his own party could not pay salaries and pensions while in power. The secretary of pensioners in Oyo State, Dr Segun Abatan, in a recent interview with the Nigerian Tribune described characters like this as charlatans. He said: “Some political charlatans were saying that the N10,000 Makinde gave each pensioner as Christmas bonus was a bribe. When they were in government, why did they not ‘bribe’ us? They were in government for eight years and they did not deem it okay to ‘bribe’ us with our entitlements. They said that Makinde had been bribing us since he came on board. I said yes, he has been ‘bribing’ us with the payment of our pension every 25th day of the month. If the 25th day falls on a Sunday, he would pay on Friday. He has been ‘bribing’ us with the payment of our gratuities that were held by somebody for eight years. Seyi Makinde has been paying gratuities which were withheld by past governments since 2008. He is now on 2014. Since he came on board four years ago, he has paid about N22 billion of gratuities unpaid by past administration.” Truly, as the people say in Oyo streets, Omititun ti take over!

S’alola, a member of Omituntun Support Group, sent this piece from Moniya, Ibadan.