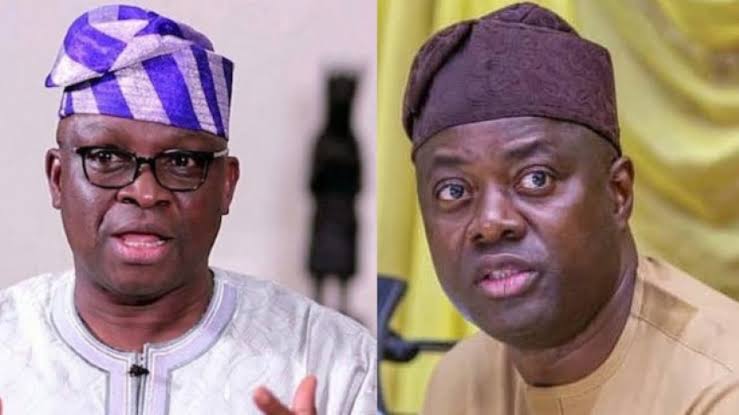 Oyo State Governor, Engr. Seyi Makinde has put aside the lingering Leadership Tussle Between him and the former Governor, Ayo Fayose and celebrate him on his 60th birthday celebration.

Makinde who took to his tweeter account to write his congratulatory message, prayed to God to keep him in good health and happiness as he clocks a milestone of his life

He said: Happy birthday to the former Governor of Ekiti State, Peter Ayodele Fayose. Wishing you many happy returns on your 60th birthday. May God bless and keep you in good health and happiness as you celebrate this milestone.

Recall that the Governor and Fayose has been engaging in supremacy battle over the leadership of the party in the Southwest PDP for a while now.

In series of publications, the duo and their aides have engaged in war of words.

There was a new twist in the happenings within the party last week Friday when the Fayose faction called a meeting and appointed Femi Babalola popularly known as “Jogor” as the Chairman of the Reconciliation barely 24 hours after a zonal caucus meeting held at the Oyo State Government House appointed former Governor of Osun State, Prince Olagunsoye Oyinlola to function in the same capacity.

On Saturday, Mr. Lere Olayinka, the Media Assistant to Ayodele Fayose, former Governor said that his principal is has no reason to compete the leadership position of the People’s Democratic Party in the South-West region with the Oyo State Governor. He added that Makinde remains the leader but he doesn’t have right to control the party anyhow.

But in swift reaction tonight, Engr. Akeem Olatunji. The Publicity Secretary of Oyo State PDP described the meeting called by Fayose as a mere visitation that has nothing to do with the party