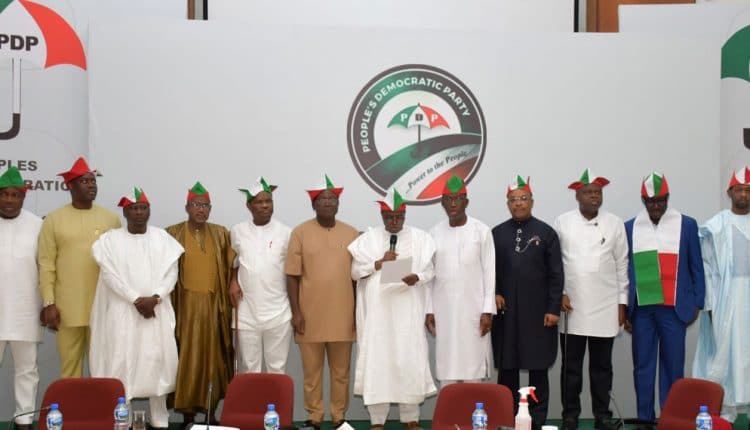 The party’s governors met yesterday on the raging controversy. After the meeting they announced that the decision will be taken today.

The party’s House of Representatives caucus is divided.

A huge protest was staged at the secretariat yesterday, asking for Secondus’ exit.

All the 13 PDP governors attended the meeting, which was held at the Akwa Ibom Governor’s Lodge, Asokoro, Abuja.

A source said the situation was so tense that the governors could not even attend the inauguration of the e-Registration platform of the party fixed for yesterday.

“All those concerned have been notified of the enlarged meeting with the governors on Tuesday (today) in Abuja. These governors technically shifted the D-Day.

Chairman of the PDP Governors Forum, Tambuwal, who spoke briefly with reporters, said the governors and other stakeholders had resolved to work together in unity in the interest of the party.

Tambuwal declined answering a direct question on whether the party chairman would stay or be removed. The governors invited Secondus to the meeting about 40 minutes before it ended.

A source said the party would have to choose between Secondus and the Rivers State Governor, Mr. Nyesom Wike, who is championing his removal.

The source further hinted that in weighing the options, the governors and other stakeholders would have to consider who, between the chairman and the Rivers governor, is considered more strategic to the party’s future ahead of the 2023 general elections.

The move to unseat the chairman has also further split members of the National Working Committee (NWC). Nine members of the 18-member NWC were said to have held a meeting at the Transcorp Hilton Hotel, Abuja on Sunday, where six of them purportedly voted that Secondus should resign.

The meeting was said to have forwarded the decision of the six officers to the PDP Governors’ Forum, the Board of Trustees (BoT) and the National Assembly Caucus.

But National Legal Adviser Emmanuel Enoidem, described the meeting where six members voted for the removal of the chairman as illegal.

According to him, by virtue of Section 29(3) of the PDP Constitution, it is the National Chairman, or a summon backed by two-thirds of members of the NWC, that can validly convene a meeting of the body.

In a statement, Enoidem said: “As a bona fide member of the NWC, to the best of my knowledge, I am not aware of any meeting of NWC summoned by the National Chairman or in the manner provided aforesaid.

“It is therefore, of grave concern, and indeed, very sad to read the above position purportedly taken by some distinguished members of the NWC in utter disdain and violation of clear extant provisions of our constitution.

Secondus media adviser, Ike Abonyi, said in a statement, shortly before Secondus heeded the call from the governors to appear before them, that: “The tiny minority calling for my resignation should come clean and tell party members across the country my offense why I should resign.”

Secondus said he would remain focused and committed to the ideals of the party which he swore to protect and defend upon his election to lead the party 44 months ago.