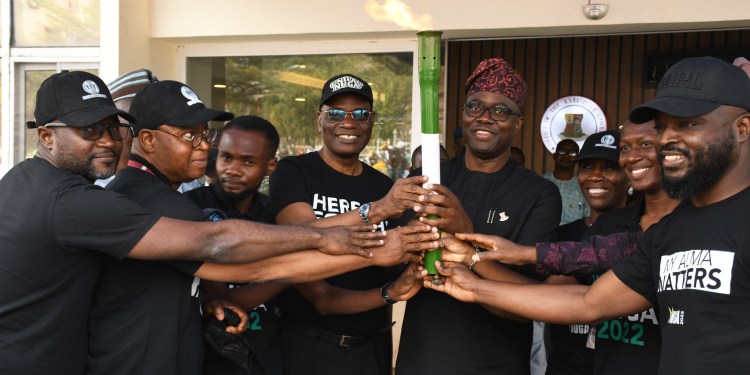 The governor of Oyo state, ‘Seyi Makinde has promised to support his alma-mater, the University of Lagos, Akoka, with N25m to enable the institution host the Nigerian Universities Games (NUGA).

Governor Makinde stated this on Friday while receiving a delegation of the university, led by its Vice Chancellor, Professor Toyin Ogundipe, at his office inside the Secretariat, Agodi, Ibadan.

Makinde who appreciated them for the visit, commended the Vice Chancellor and his team for transforming the institution especially, the sports centre.

A statement by the Chief Press Secretary to the governor, Mr. Taiwo Adisa, quoted the governor as saying that he would contribute N25 Million, in his private capacity, to the success of the games.

“When they say ‘Eko for Show’ and I remember I left UNILAG in 1990, from that time till now I have had the opportunity to come back to UNILAG’s sports centre and I see that it has undergone tremendous transformation. I passed by recently and I saw quite a lot being done.

“I want to say well done to you and your team. At this stage, the only thing we can do is support UNILAG to bring out the best show for this period and personally I would support and I will also approach a few friends of the school to also support,” Makinde said.

Further assuring them of his support, Makinde said, “I have seen the note and personally I will contribute N25 million, I will also approach a few of our friends who will be ready and willing to support this course and whatever we are able to raise will go a long way.

“I will put a call through to my colleagues, the governors of Akwa Ibom and Lagos to say I have done this, so you better do more than that because Akwa Ibom is a second term governor and he should be able to do more and Sanwo-Olu is the host governor and Lagos is the biggest state, economy-wise and so he should do better.

“We would support as much as possible. Once again, I wish you well and please if you think there are things we can do better to support you, let us know,” he added.

The governor challenged the two students representatives not to just stop at NUGA games, but push further to become international athletes and also to influence talent in various fields.

Earlier, UNILAG’s Vice Chancellor, Prof. Ogundipe commended the Governor Makinde-led administration over the good works being done across the nooks and crannies of the state, describing him as a worthy and distinguished alumnus of the institution.

He explained that the institution is in need of assistance that will make the NUGA games the best and most successful, saying Makinde’s contributions toward the development of his department, faculty and institution, cannot be underrated.

Ogundipe said, “We want to thank you for the work that you are doing and the testimony people are giving concerning you. We went through Molete and Oja’ba and honestly speaking it was a smooth ride because of the improvement of the network around that place.

“When we record some of the things that the alumni are doing, who are governors and deputy governors of their states like Lagos State, Oyo State, Akwa Ibom State, Anambra State and these we are cataloging, it is part of what we are going to put in our 60th anniversary, which is coming up in December.

“We want to appreciate you for what you have done even before you came in as the governor, for your contribution in the Faculty of Engineering, the last time we came here, we said it that the Faculty of Engineering, your department; the laboratory then happens to be the best laboratory until now and when people came that they were going to do something for us, I had to show them that laboratory and say ‘you are not going below this standard.

“Now, they are working on it and we are doing this to tell other alumni to look at the 3Ps; the Project, Programme and Person and people have been doing that”, he said.