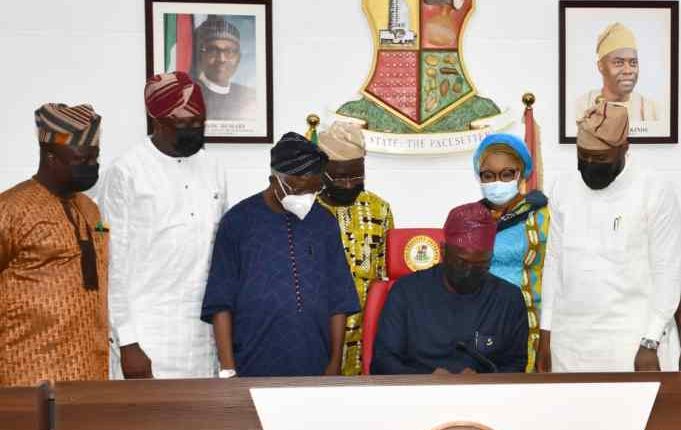 Makinde Reels Out Achievements — How We Increased IGR From N1.9bn To N3.3bn Monthly in Less Than 3 Years

Oyo State Governor, ‘Seyi Makinde, on Wednesday, signed the 2022 budget of N294.7billion and the Bill on Financial Autonomy for the House of Assembly into law, stating that the budget represents the wishes of the people of the state.

He maintained that the government will target 70 to 75 per cent performance for the 2022 budget, adding that his administration will continue to make the budgetary process in the state open and transparent.

A statement by the Chief Press Secretary to the governor, Mr. Taiwo Adisa, indicated that the governor signed the two Bills into Law at the Executive Chamber of the Governor’s Office, Secretariat, Ibadan.

He noted that the signing of the Financial Bill into law confirmed that Oyo State is practising the principle of separation of powers between the three arms of government.

Makinde, who christened the document ‘Budget of Growth and Opportunities,’ said that with the increase in revenue, his administration will be able to fund the 2022 budget and record higher performance.

He said: “The total figure for our 2022 Budget of Growth and Opportunities is N294,704,535,356:94 as passed by the Oyo State House of Assembly. I must use this opportunity to thank our Honourable members, especially Mr. Speaker, for the speedy passage of the budget proposal. So, today, I have just signed the Appropriation Bill into law.

“The document represents the wishes of the good people of Oyo State. We started this budget process with town hall meetings in all the geo-political zones of our state. We got the input of stakeholders before deciding on how to appropriate our spending.

“So, we can rightly say it is our budget. As you know, it is one thing to pass a budget, it is more important to implement.

“Before we came in, the previous administration recorded about 30 per cent performance but if you check the record, you will see that our budget performance was over 50 per cent.

“And you know that one thing that impacts budget performance is revenue. If you don’t have the money, you have nothing to spend.”

The governor maintained that the state government was able to record an increase of over N15 billion in its Internally Generated Revenue, which represents a movement of the state from number 9 in 2018 to number 7th position.

The governor added: “When we talk about our internally generated revenue, we have moved Oyo State from number 9 in Nigeria in 2018 to number 7. And this movement, you may just think it is from number 9 to 7, it represents an increase of over 15billion Naira in IGR without increasing taxes of our people.

“So, with the increase in revenue, we are better able to fund our budget and record higher budget performance. “When we came in, we met the IGR at N1.9bn per month, and within the past two and a half years, it has gone to between N3bn and N3.3bn per month. So, we looked back at the 2021 budget performance, we consolidated on the gains of the 2020 fiscal year. We completed some of the projects we started in the previous year and commenced new ones.

“A major highlight of the year was completing the first phase of the work at the Lekan Salami Sports Complex, Adamasingba. In the first half of 2022, we look forward to the completion of the second phase.

“Earlier in the year, we also completed the Moniya-Ijaye-Iseyin road and as I talk to you, we have completed the 9.7km Saki Township Road dualization, which is just waiting for commissioning.

“Also, our market men and women are happy to get back their shops at the remodelled Akesan market, which was razed in January 2020. And those at Sasa Market will look forward to moving back to their rebuilt market in 2022.”

The governor listed several projects that the administration is looking forward to completing in 2022, including the four bus terminals being constructed at Challenge, Ojoo, Iwo Road and New Ife road and the Fasola Agribusiness Industrial Hub, among others.

He charged residents of the state to continue to ask questions about what the administration is doing and how it is spending the state’s resources, saying: “That is why I try not to acknowledge when people try to say they want to come and thank me for doing this and that. It is the people’s money but not my money and we must spend it for the people.

“But I must also mention that every right comes with responsibility. Yes, you have the right to ask questions and you also have the responsibility not to spread lies and disinformation.

“Last year, during the budget signing, I had to dispel the rumor in the Press that the Oyo State House of Assembly had padded the budget. This year, it is something new. Some people went out to say that the N26bn allocated to capital and recurrent expenditure of the governor’s office is for feeding. Let me ask, what could we possibly be eating that will lead to such allocation?

“Well, let me make it clear for those who are still confused. The Governor’s Office is made up of at least 10 departments and agencies. Each department and agency has staff and they also carry out capital projects.

“We also have other agencies under the Governor’s Office, like the Bureau of Public Procurement; Operation Burst and the Oyo State Anti-corruption Agency. “So, anyone going around saying this money is for feeding is just a mischief-maker.

“With this budget of growth and opportunities, we have things to look forward to in 2022. I will also like to take this opportunity to thank the good of Oyo State for all the support that you have given our administration in the last two years and for the opportunity you have given us to serve you.

Oba Lamidi Olayiwola Adeyemi, The King Who Has Refused To Grow Old In Strength