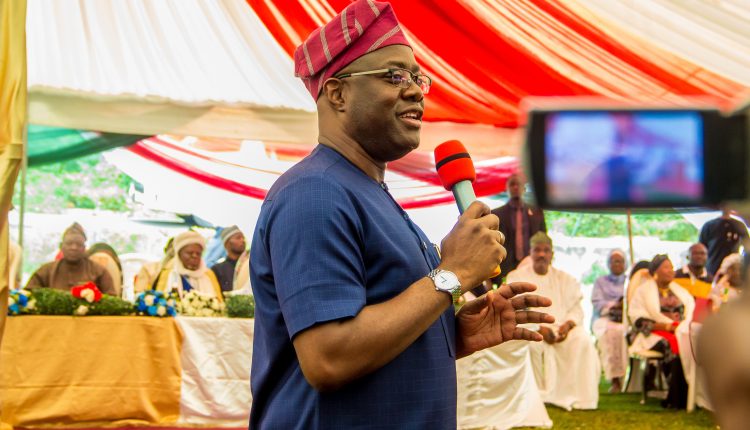 Makinde Reiterates Commitment to Security, Pledges to Continue to Protect the Interest of all Stakeholders

Oyo State Governor, ‘Seyi Makinde has on Wednesday stated that his administration has overhauled the security system he met in the state so as to guarantee the interests of all stakeholders.

The governor made this known during the Hijrah 1444 luncheon held at the frontage of the Presidential Lodge, Government House, Agodi, Ibadan.

He further restated that security is a key aspect of his administration’s four-point service agenda.

Makinde assured that the government will continue to protect the interest of all stakeholders in the state irrespective of their religious or ethnic affiliations.

“When this government came in, the security architecture we met on ground was different from the layers we have created. We rejigged the SRS, we provided 100 cars within 100 days in office for the Police. Another layer of security we came up with was Operation Burst, which is composed of Army, Airforce, Civil Defence, DSS personnel. We provided logistics and all they needed to function effectively for them.

“Another layer of security we created is Amotekun. We have another layer – Voluntary policing, but we are encountering some challenges in coming up with it. Vigilante people are working in Ibarapa zone of this state as I encountered them personally in my recent journey along the area. And I will continue to say that we cannot demonise any ethnic group in the state”, he added.

Governor Makinde maintained that his administration has not only overhauled the security architecture of the state, but it is also doing everything within its capacity to make the state safe and secure for every citizen.

A statement by the Chief Press Secretary to the governor, Mr. Taiwo Adisa, quoted the governor as saying that his government will always give every interest their due.

The governor emphasised that the Hijrah being celebrated in the state amounts to what he called a turning point. He said that the turning point in the case of Oyo State was brought about by his victory in 2019.

“What is the Hijra we are celebrating today? It is a turning point. The turning point that came into effect in 2019, which brought light and made darkness to vanish in the state.

“Righteousness also replaced wickedness and I can assure all of us that darkness will not return to Oyo State”, he added.

He also stated that his administration promised to be tolerant and avoid religious bias and that it will continue to give everybody what they deserve to get, adding that it will not deviate from such promises.

Similarly, Makinde admitted that being a human being, he can make mistakes but that stakeholders should readily point out such mistakes and they will be corrected, while adding that he will not allow the enemies of the state to succeed, as he insisted that he will deal with them.

He said: “Who are our enemies? They are the criminal elements, but whoever they are, we will deal with them in Oyo State. So, we are trying our best and we will continue to ensure Oyo State is safe and secure.

“Secondly, those who think they can separate us through religion won’t make any headway because the two religions (Islam and Christianity) are in our families.

“In Oyo State, we have Hijab policy. If that policy is going to change, there must be engagement with stakeholders and I am happy to say that we are ready to have that engagement”, he assured.

While debunking an allegation by a group called Muslim Rights Concern, MURIC, the governor said that his administration has never nursed any plan to return public schools to their owners, noting that those inciting religious bias in the state would fail in as much he is not going contrary to the mandate given to him by the electorate.

He said: “I am happy to say that we are ready to have that engagement. We have a muslim as commissioner and we cannot take such step without his involvement.

“Yes, I also went to Loyola College. They made a request for the return of the school to the Old Students Association and I told them that we are still on the ‘Proof of Consent’. We are developing a template because the government alone does not have the resources to educate our children effectively and that is the fact.

“So, we need to educate our children so that they can be with us in the future to do the needful”, he added.

In the meantime, Makinde has declared that the state will always guarantee the rights of all the stakeholders to functional education.