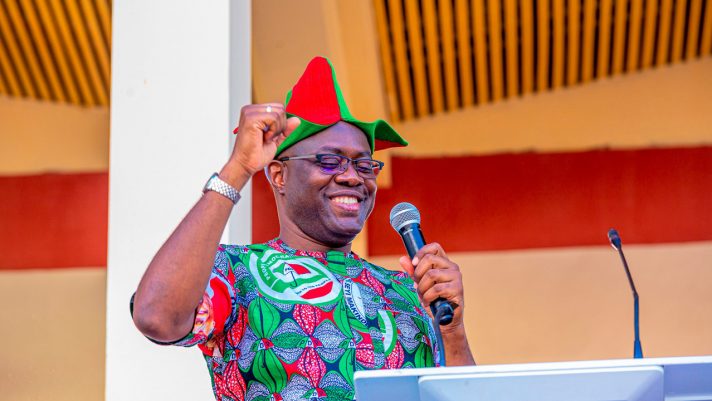 Makinde: The Making Of A Strategist

“Yiyo ekun, ti ojo ko,” so goes the Yoruba saying. It translates to, ‘The gentility of a tiger is not a sign of weakness.’ In the jungle, ‘that the lion is master of stealth does not translate to fear.’ That is what the Yoruba saying is affirming in those words.

At the Eagle Square, Abuja in the early hours of Sunday, October 31, Governor Seyi Makinde had just delivered his candidate, Amb. Taofeek Arapaja as the Deputy National Chairman (South) of the Peoples Democratic Party (PDP). From the ranks of his supporters, somebody hailed – The master strategist! The governor gave him thumbs up and the general backslapping continued.

Simply called GSM, Makinde, who was thrust into the frontline of Oyo State’s politics via the March 9, 2019 governorship election, is fast emerging the master of stealth as the strides of his politics and policies seep through the state, zonal and national scenes. But the fun is that his political opponents often fail to realise that stealthy strategic moves are no signs of weakness for the Oja’ba, Ibadan-born Engineer-turned-politician.

Many easily mistake the slow pace of his speech – he is never in a hurry to drop his words, his gentle mien, and simple looks – as signals of an everyday man, whose benign postures could easily be put out with a featherweight punch.

Whether his amicable nature generally contributed to the lightning-speed penetration of his Omituntun mantra across the length of Oyo State ahead of the 2019 election is something political analysts and theorists are yet to fully calibrate, but it is becoming certain that some natural affinities that are considered as off-cuts by some contenders have become firm parts of the robust stratagem that delivers the goods to GSM, battle after battle.

At the state level, the challenges dared him firsthand; a state steep in a hellhole of local and international indebtedness, one owing more than 96 months of pension arrears and arrears of gratuities from 2010; a state burdened by infrastructural decay; worst out-of-school and educational records in Southwest; a state steep in the dunghill of filth and whose Internally Generated Revenue (IGR) offers no succour for its myriads of problems.

Surely, the task appears daunting but Makinde knew that noise-making wouldn’t solve the problem. The elders say the empty barrel makes the loudest noise. Stealthy stratagem, as Shakespeare would have it, is the way to go. And by stealthily stalking the challenges one after the other, the debonair Engineer, whose hallmark is using science, logic and data to solve problems bedevilling the state, has depleted the ranks of the challenges and given his people some level of comfort.

From the inauguration podium at the Liberty Stadium, Ibadan, he launched salvos at the troubles that beleaguer the education sector by declaring free and qualitative education, canceling levies and announcing the implementation of the Roadmap to Accelerated Development of Oyo State, 2019-2023, which encapsulates the four-point service agenda, to wit, Security, Health, Education and Economic expansion through agribusiness value chain.

The free and qualitative education initiative saw to the recruitment of 5,000 teachers, training and retraining of teaching staff, provision of textbooks, notebooks, compendium and extra classes for students writing external examinations among other motivations. The result is that the state moved from 26th position in external examinations to 11th, with more students winning individual laurels. The fact that he was able to wean the Ladoke Akintola University of Technology from joint ownership with Osun amounted to a massive gain, which is further lifting the high standards already attained by LAUTECH.

Again, silently and in the dead of the night of Monday, November 25, 2019, the governor declared an emergency on waste in the state to salvage the mountain of filth across the city of Ibadan and other towns and within months, the city of Ibadan started wearing some new looks. But old habits die hard. The previous government had cultured the people in the act of dropping refuse on road medians and strategic street corners.

That’s not the way of the Makinde government. The old habit would fight the new but with the persistence of the new environment commissioner, Okunrinjeje Abiodun Oni, the huge mountains of refuse are being subdued.

Infrastructure targeted at lifting the economy were kick-started from June 2019 and within months, despite the stalling effects of the COVID-19 pandemic, positive results started pouring in. The 65-kilometre Moniya-Iseyin road, which provides direct inroad to Oke-Ogun, the food basket of the state, was reconstructed in record time. Bus terminals in Ojoo, Iwo Road, and Challenge started springing to life, to give new face to the transport sector, the Challenge-Felele-Idi Odo Junction Improvement in Ibadan that gave road users a new lease of life, the light-up Oyo State project covering over 223.8 kilometres of roads across the state, and the Akufo-Awotan first concrete road, leading of the foremost Akufo Farm Estate are among the results.

The Makinde government continues to deliver on its promise to build infrastructure that target the economy, with the Oyo-Iseyin Road linking the Fashola Agribusiness Hub, which is progressing at a great speed. The 21-kilometre Ajia-Airport road with spur to Amuloko; the Awotan Dumpsite turned Landfill, the upgraded Adamasingba Stadium and mini-stadia across the seven geopolitical zones coupled with the bold Agribusiness engagements including the establishment and rejuvenation of Oyo State Agribusiness Development Agency (OYSADA) and the training of 10,000 agriprenuers at CSS Farms, Nasarawa are among the other success stories recorded by the master strategist that Makinde has become.

Having enhanced the ease of doing business and promoted the state’s comparative advantage in agriculture, agribusiness and solid minerals, it did not come as a surprise that the state’s Internally Generated Revenue has been on the rise. It rose as much as 26 per cent in the heat of the Covid-19 pandemic and 42 per cent year-on-year at the end of year 2020. In half-year 2021, the state’s IGR earnings placed it among the seven best performing states in the country and there is every certainty that the rise is now a permanent feature of the Makinde government.

On security, the governor midwifed the Amotekun security network to complement the overstretched federal security structure and enhance local initiative at ending widespread security challenges. The light-up Oyo project provides a security component, while the CCTV coverage of the state is another. In the area of health, the major push to build a modern primary healthcare centre in each of the 351 electoral wards across the state and promote the Tomo Tiya health initiative and the battle is being quietly won. Remodeled primary healthcare centres are already springing up in the localities.

After surmounting the governmental challenges, the battle at the political front popped up. Many were quick to note that the Southwest chapter of the Peoples Democratic Party (PDP) was already doomed under his leadership. The zone went into its congress in Osogbo, Osun State a divided house, with the Makinde camp believed to be up in arms against the Fayose/Adebutu/Adeleke camp. Many easily wrote off Makinde-backed Ambassador Taofeek Arapaja in the zonal congress but with stealth as strategy and science, logic and data as core strengths, Makinde snatched victory from the jaws of defeat. Arapaja emerged the National Vice Chairman, Southwest and the focus shifted to the national convention of the party held in Abuja on October 30- 31. But the same scenario was to play out again, with the same Arapaja, backed by the Ibadan strategist emerging the Deputy National Chairman (South) of the PDP through an overwhelming vote of the delegates. The legend in all this is that rather than fall for the doomsday projection that his style would keep the party divided, Makinde’s actions have forged unity within the ranks of the PDP at the zonal and national levels. First, the factionalised Osun PDP is back together and today, the South-West PDP is speaking with one voice. Makinde and Fayose, earlier pictured as arch enemies, are best of friends. It is now obvious that the South-West PDP under Makinde’s leadership is tilting towards peaceful coexistence rather than rancour. Such is the effect of the gentility of a tiger posture concentrated in Makinde’s stealthy strategy.

In the days preceding the national convention, when it seemed the bid for consensus was headed for a crash, Makinde as secretary of the convention’s central planning committee alongside the chairman, Governor Ahmadu Fintiri of Adamawa State, spearheaded the shuttle diplomatic moves. The daily routine for the Oyo State helmsman was predictable- early morning trip to the Legacy House office to meet with key arms of the convention planning committee, occasional press briefings and then meetings of the Governors’ Forum. One minute he was attending to files in the Legacy House, another minute his convoy was on the way to visit some elders, and then another meeting was already set up in a governor’s residence to perfect the consensus plan and then a return to Legacy House for further meetings and in another hour he was on his way to the home of ex-President Goodluck Jonathan and other leaders, then a visit to Eagle Square, venue of the convention to ensure things went according to plan and then the day would still terminate at the night-long Governors’ Forum meeting at Akwa-Ibom House. That routine was repeated almost on a predictable fashion from Monday to Friday and by Saturday morning it was a crescendo. 18 of the 21 positions had been determined by consensus and the most peaceful PDP convention in 23 years had been born. In the early hours of October 31, when the full list of the new PDP National Working Committee-elect was announced by the Chief Returning Officer of the convention, Governor Makinde, events had gone full cycle and the legend of the strategic engineer had been affirmed.

JUST IN: 3 Persons Dead, Others Injured In Lagos-Ibadan Expressway Crash