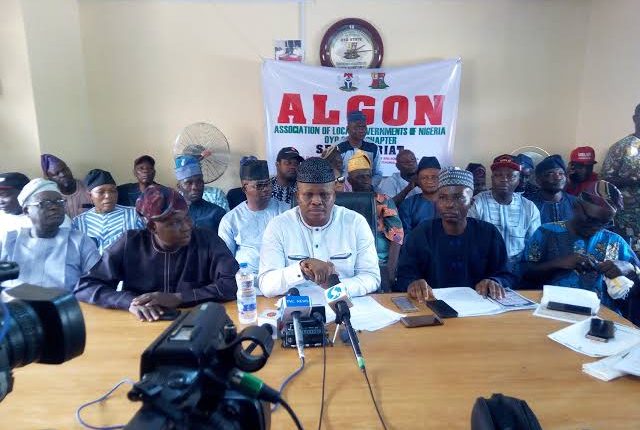 Following what they termed as a display of greed and financial impropriety by the former chairmen of the Association of Local Government of Nigeria(ALGON) in Oyo State, their secretaries, chiefs of staff and supervisory councillors, have drawn a battle line with them over the injustice and unfair treatment meted on them in respect of the sharing template on the disbursed N1billion received so far by the judgment creditor.

The forum berated the ex-ALGON chairmen for lack of discretion and total disrespect to its members on the adopted sharing formula.

In their reactions, while speaking with Vanguard yesterday, the ex F&GPC members of the local govt and LCDAs’ lamented that the decision taken by the ex-chairmen of ALGON was a cruel and apparently an embarrassment on their members who also constituted an important layer in ALGON.

The group noted that the ex-ALGON struggle was beyond elected officials alone.

Noting further, the group opined that the bulk of the money utilized to prosecute the protracted court case was not solely from chairmen, adding that it was sourced from multiple channels including serving national assembly members, a forum of local government appointees and individuals.

Meanwhile, Vanguard gathered that the forum of secretaries, CoS and supervisors had now requested the service of a competent lawyer for legal advice and steps to be taken to sustain the course of justice.

It was learnt that they have equally met with the ex-chairman of ALGON in the persons of Mr Abass Aleshinloye, Mr Jesutoye, Comrade Ajuwon and the likes, over injustice being meted on them, and they vowed that they would soon embark on a mother of all protest soonest if they feel reluctant to correct the injustice.

While justifying their stance, the secretaries, chiefs of staff and supervisory councillors claimed that the same chairmen who had been in offices for nearly a year before their appointments refused to pay their backlogs of salary and statutory entitlements despite being appointed three months before their “inglorious” dissolution.

They condemned the ex-chairman for proving that they were entitled to take the lion share, having stood in positions to sign the documents and all correspondences that necessitated their appointments across the local governments.

With the alleged injustice, they have shown their readiness to embark on mother of all protest, not minding the service of a lawyer, who on their behalf, will seek legal interpretation of involvement in the administration of the local council.

They fumed that they cannot accept the money to be disbursed into their respective bank accounts, because they all suffered, faced hell and battles while the goings were tough.

They concluded that the ex-chairmen are self-centred, wicked and unmindful over their stance, to allocate such a huge share to themselves, while only approving such a ridiculous and meagre amount to the appointees.

INTERVIEW: I Was Part Of Those That Impeached Ladoja, I Have No Regret – Prof Soji Adejumo