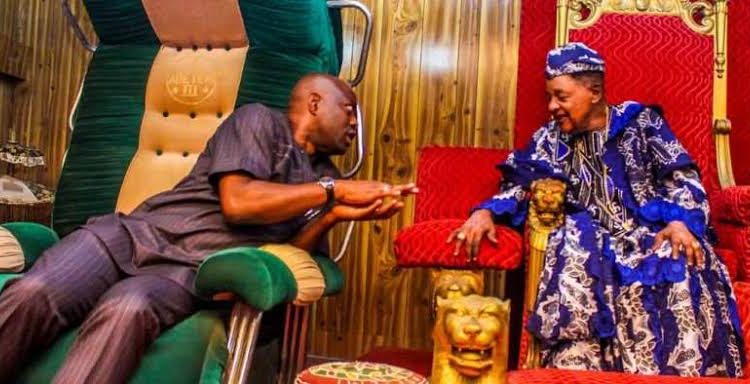 The Imperial Majesty, Alaafin of Oyo, Oba Lamidi Adeyemi 111, has commended the governor of State, Engr. Seyi Makinde, for his efforts at embarking on people-based programmes and Projects which are in fulfilment of his promises during the electioneering period.

Oba Adeyemi made this remark on Tuesday when he made the acquittance of France Ambassador, Mr. Pasquer Jerome, who alongside his entourage came on a tourist visit to the ancient Palace.

The First monarch added that the State government’s tireless efforts has been the reason behind the positive changes in tourism and cultural sector that has been attracting foreign and local tourism experts to the State.

“The governor has shown enough evidence that
he is for the people, this is indicated in his people-based programmes and his efforts at fulfilling promises made during the campaign period where he vowed to make a change that will truly benefit the people.

“Everywhere you go, the State government is embarking on urbanization projects that will serve the people and promote commerce, I commend him and advise that he does not rest on his oars.

“The cultural and tourism sectors are already experiencing positive changes that which has attracted foreign and local tourism experts and professionals to come and do business with Oyo State, this is an indication that Oyo State will soon be counted as one above others in Nigeria in the areas of ease of doing business, tourism destination and the true home of African culture.”

While appreciating Oba Adeyemi for maintaining the pride of Africans abroad and at home in the Yoruba culture, the France Ambassador, Mr Pasquier Jerome was full of praise for the monarch for creating time to host the delegation.

He said France was working towards cooperation with Oyo State to boost partnership in research in archaeology, social sciences, humanities, education and promotion of culture and tourism, which he said arrangements were already in place to build on the relationship the country already had with the University of Ibadan.

“We already had archaeological research involving forty archaeologists in Ogun State in 2019, we want to enter into a new one with the Oyo State government to catalogue their archives and look into the possibility of exploring for new raw materials.

“We also have programmes already engaging many youths in audio-visual training in Lagos State which can be extended to Oyo State for the benefit of teeming youths to train on how to become big time filmmakers, we look forward to partnering with the State to promote some of the notable tourists’ sites as well,” he said.

Those on the visiting team was Mr Rafael Pont, Head of Cooperation and Cultural Affairs, Embassy of France, the Consul General, Embassy of France, Mrs Monmayrant Laurence and Prof. Mathieu Leila who is the head of Science and Higher Education Attaché, political appointees and officials of the State Ministry of Information, Culture and Tourism.