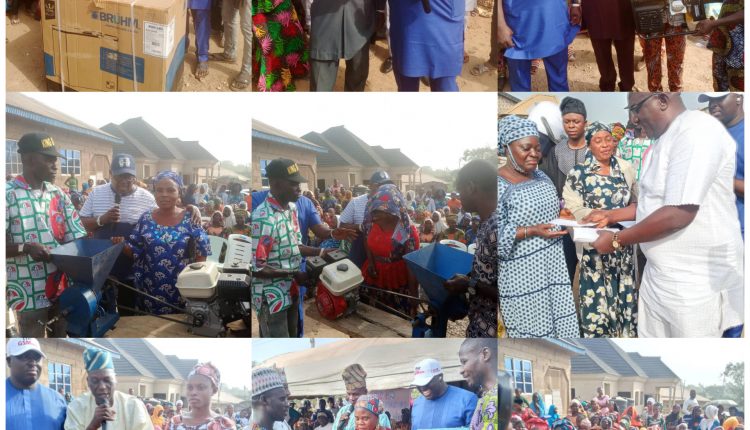 An Ally of Governor Seyi Makinde and a Chieftain of the People’s Democratic Party (PDP) in Lagelu/Akinyele federal Constituency has again put smile on the faces of residents in a mega empowerment scheme held on Sunday at his residence.

Mr. Benedict Akika who said the empowerment scheme was in commemoration of the remembrance of his late father who left this world 28 years ago, in his words, he might have left but his memories are still fresh.

Akika junior has earlier took to his official Facebook handle to write a tribute to his late father Late Pa. Philip Umoru Akika

The event took a moment of reflection after Benedict Akika Said, he’s been used to a small boy in his immediate evironmemt, who has been his barber for sometime now, he said he fell in love with the service this little boy rendered to him, and he made up his mind to help him succeed, the young man was given a generator, Manual and electronic Clippers, Apron and Barbing Saloon equipments to further enhance his business.

While a focanizer who has over time face difficulties with his machine was also presented with a brand new machine to further aide his business, reacting to the guesture Mr Benedict Akika said I don’t know then from adam, i was only previldge to know them through their hand work, and then have the urge to help them the little we can.

Mrs Ojuolape received Hairdryer for her hairstylist shop, it was a big joy when Mrs Olalere Salewa and Mrs Olawale Aminat who were gifted a chest freezer each, and cash prize of 20,000 appreciated the donor, Benedict Akika for the kind gesture which they said is not a surprise he’s been doing this over the years, he has been of immense blessing to our area and they promised to judiciously utilize the items given to them.

Others were empowered with various items, while over 400 people Also went home with Christmas Packages to ensure their festive season is fun.

Mr Benedict Akika who appreciates everyone for their impacts towards the success of the empowerment scheme, use the opportunity to thank Governor Seyi Makinde, Saying “We will keep following his developmental strides, ensuring our people are developed. We Open a training school for all the beneficiaries, they’re all beneficiary of our training school, now we are sure they will use the skills Learnt to further developed themselves.