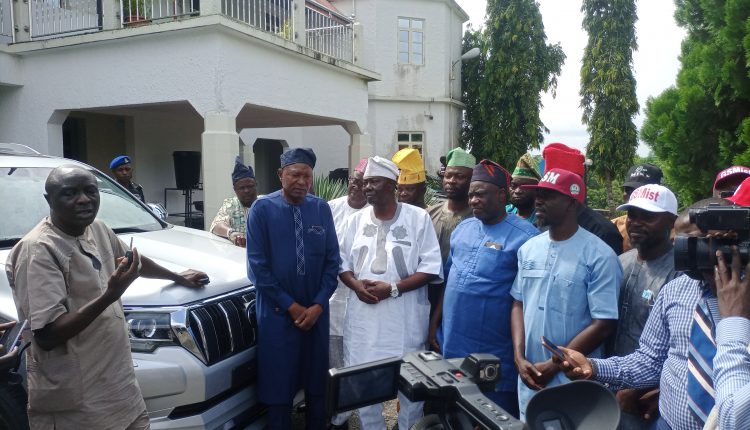 Mixed reactions have greeted the donation of two Land Cruiser Prado jeeps to the immediate past Chairman of Oyo State Peoples Democratic Party, Kunmi Mustapha, and the newly elected Chairman of the party in the state, Dayo Ogungbenro.

The publicity secretary of the party, Akeem Olatunji, confirmed the donation on Monday, noting that it took place at the State Government House, Agodi, Ibadan.

According to him, the leaders were rewarded because of their loyalty.

He posted, “GSM at it again as he donates two Land Cruiser Prado Jeeps to the immediate past Chairman of Oyo State PDP, Alh Kunmi Mustapha, and the newly elected Chairman of PDP in Oyo State, Hon Dayo Ogungbenro.

“The two Jeeps were handed over to the two beneficiaries by the Chairman of Governor’s Advisory Council, Senator Hosea Agboola Halleluyah, with the assistance of Otunba Seye Famojuro and Hon Babatunde Tijani Double T. The summary of today’s event is that loyalty pays. Thank you Governor Seyi Makinde. Congratulations my Leaders.”

Reacting to the donation on social media, some respondents commended the governor, claiming that the donation would be a morale booster for the politicians.

One of them, Muritala Abiodun said, “Truly, Alhaji Kunmi Mustapha surprised me with his kind of loyalty and sportsmanship attitude towards the recently concluded congress. Congratulations to both of them.”

“Congratulations GSM, you are a nice man. Kudos to my Governor,” Kehinde Ogunrinu added

However, a majority of respondents on Facebook faulted the donation and questioned the source of money used to purchase the jeeps.

On his part, Seyi Olugbodi, said, “This is not an achievement, you didn’t state if it was a personal donation or otherwise? He has serious issues to face on governance and getting it right with the aggrieved party members!”

“Out of state treasury or personal purse?” Olaitan Kazeem queried

Also, Oladeji Moshood said, “Just keep on spending the public money as you wish, the day of reckoning is fast approaching.”

Another respondent, Ariwoola Abiola, described the donation as a “misplaced priority”.