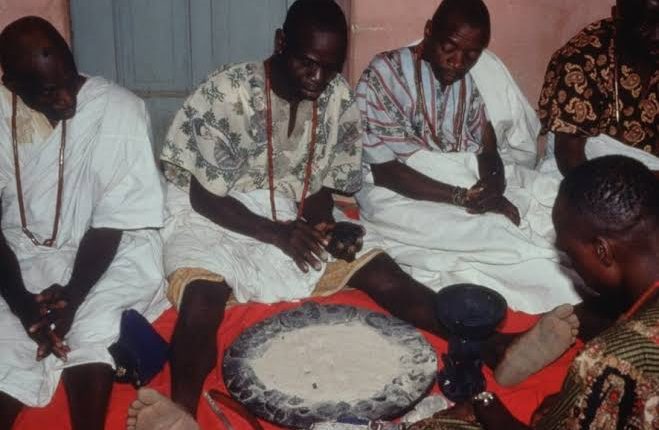 One of the prominent Ifa leaders and Ejemu Awo of Ibadan land, Chief Ifasayo Ifadamitan Alabi, has said there is nothing like money ritual anywhere but deceit, which many ignorant youth are falling for.

Alabi, who bemoaned the bad image that the crime had brought on genuine Ifa priests, said those involved in the deceit of money rituals were not Ifa priests but juju men, playing on the ignorance of their victims.

Speaking to the Punch Newspapers, Alabi disclosed that genuine Ifa priests were also strategising on how to identify the criminals among them and they would be handed over to the police for prosecution.

He urged journalists not to identify or mistake criminals caught dealing in human parts for Ifa priests but juju men, who he said should be punished by the law.

Alabi, who is also the Ejemu Awo of Ibadan, said many Nigerian actors who were initiated into Ifa religion when they were looking for fame turned round and began to disparage Ifa after becoming successful.

He complained that Ifa priests were always portrayed as haggard-looking wicked beings, living in dirty environments.

According to him, the pictures being painted in Nollywood movies were not the true representation of Ifa priests.

He warned actors and actresses to desist from portraying Ifa priests in bad light, saying those who refuse to stop after the warning, would begin to see the repercussion of their stubbornness.

Similarly, the Aare Onakakanfo of Yorubaland, Gani Adams, has bemoaned the use of human parts for money rituals, saying such was strange to the Yoruba culture and traditions.

Speaking on Monday at the 2022 edition of Wealth Festival (Odun Aje), which was held at the Powerline Praying Ground in Orile Agege, Lagos State, he stated that he had in recent times monitored the various stories of ritual abuse and money-making across the southwest.

Adams noted that there was an urgent need to speak up against the barbaric act.

“It is sad though that our society has lost its core values. What we see today is a complete departure from the original practice and ethos of the Yoruba race.

“As the Aare Onakakanfo of Yorubaland, it is time for me to speak up and express my displeasure at the ugly narratives that have turned Yorubaland into an abattoir, where human parts usually littered the entire community.

“Things cannot continue like this. We are at the centre of all these and we must speak against this ugly trend. All our royal fathers in Yoruba land should speak up,” he said.

One Dead, Another In Coma as Ibadan Poly Student’s Went on 11-rounds S3x Romp (Photos/Video)