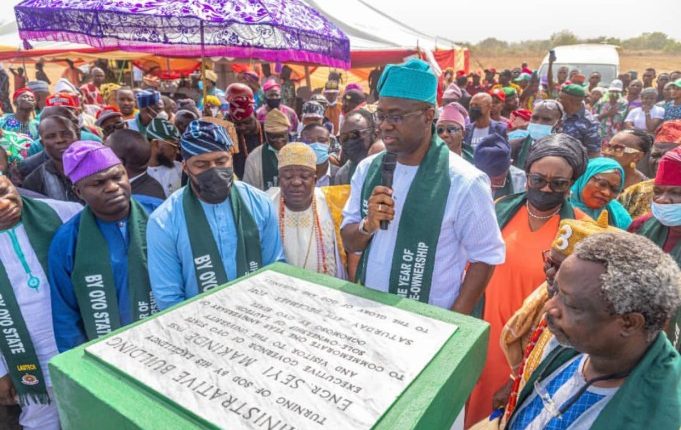 Oyo State Governor, Seyi Makinde, has said the Iseyin-Ogbomoso road newly awarded for N43.1 billion will aid the movement of staff and students between the two campuses of the Ladoke Akintola University of Technology.

The governor, on Saturday, inaugurated the construction of the Iseyin campus of the University.

The governor recently approved the relocation of the Faculty of Agriculture and Natural Sciences of LAUTECH to Iseyin.

Makinde said, “For example, on this issue of tertiary education, we promised that we would work towards sole ownership of LAUTECH. We knew that we could not build anything else without that foundation and we kept that promise.

“As a result, the students at LAUTECH no longer have their education disrupted by strikes due to non-payment of staff salaries. Students can register at LAUTECH and be assured that a four-year course will take them four years to complete.

“Also, when we said we would take the multi-campus approach in order to bring educational development and, by extension economic development to other zones in Oyo State, some people also thought it was impossible. Well, with today’s event, we kept that promise.

He stated that the state government had already released the sum of N500 million as a grant to the new faculty to ensure its smooth take-off, noting that an additional grant of about N200 million would come from the Federal Government.

The governor also said that the LAUTECH management would discuss with students who were protesting over the policy that any student who failed to pay school fees would not be allowed to sit for examinations.

He added that his government had already done everything possible to make life easy for students, noting that apart from investing in improving infrastructure and services in LAUTECH, it had also approved a 25 per cent reduction in school fees, which would be effective from the new academic session.