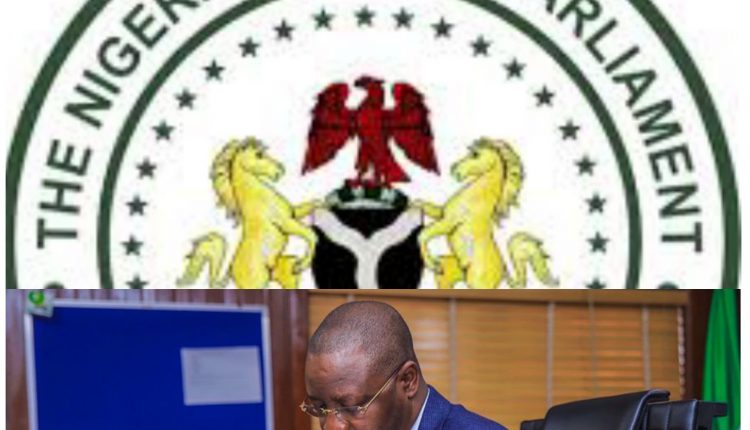 Some members of the Nigerian Youth Parliament have send a warning signal to the Ministry of Youth and Sports, Calling of the Minister Mr Sunday Dare not to recognize Yishau Azeezat who was controversially pronounce Speaker of the Parliament.

The election which was held to produce the next Speaker was Aledgedlly merged with vote buying, with an inside support for a particular candidate Akedeoyo.com Understands.

The Speaker of the house of representatives Mr Femi Gbajabiamila was fingered In a statement made available to newsmen on Thursday, some members under the aegis of ‘Concerned Members of the 5th Session’ maintained that Yishau Azeezat’s reported emergence was conieved.

It is with great pleasure we welcome our co-compatriots in the fourth Estate of the realm to this press briefing. We thank you all for sparing your time to attend this press conference despite your tight schedule and at short notice.

We are amazed by the level of manipulations that play out during this election as some state government officials were given access to the venue of the Election with intent to monetize the election of the Speaker where Dollars were openly traded for votes in the unconstitutional run-off Election.

Before the manipulations through the Unconstitutional Run-off as orchestrated by Mr. Sanni Abdullahii Clerk Senate Committee Agriculture /Director of the Youth Parliament in the National Assembly cum the Former Clerk and Mr. Ibrahim Hassan, the Current Clerk who were financially induced to compromise the election processes and which by implication is not in accordance with the standing Orders of the Nigeria Youth Parliament. Rt. Hon John Oluwabori Oyelami remain the duly Elected Speaker of the fifth Session of Nigeria Youth Parliament as he polled the highest Vote of all the Votes casted during the Speakership election. Seven Aspirants were nominated for the office of the Speaker with following Vote(s) as indicated below:

As it is clearly stated in Section 3, subsection (1)(f) that when more than two members are nominated and seconded as Speaker of the Parliament, the division shall be conducted in the manner prescribed in subsection (1)(e)and the Speaker-Elect who has received a majority of the votes shall be Speaker of the Parliament. In the event of non having received a majority of votes in the division, the candidate having the smallest number of votes shall be excluded from the subsequent division. A further division shall take place. With this section above the conduct of the run-off in on call for and it’s remain an illegal process.

Mr. Sunday Dare, the Minister of Youth & Sports, the Permanent Secretary and all concerned senior officials of the Federal Ministry of Youth & Sport were advised not to recognize the product of this illegality Yishau Azeezat as the Speaker of the Fifth Session of the Nigerian Youth Parliament as the process has been convoked thus not follow the normal norms of the inauguration of the Parliament.

We also use this opportunity to call on all security agencies to advice Mr. Sunday Dare, the Minister of Youth & Sport not to recognize the product of this illegality Azeezat as the Speaker of the fifth Session of the Nigeria Youth Parliament.