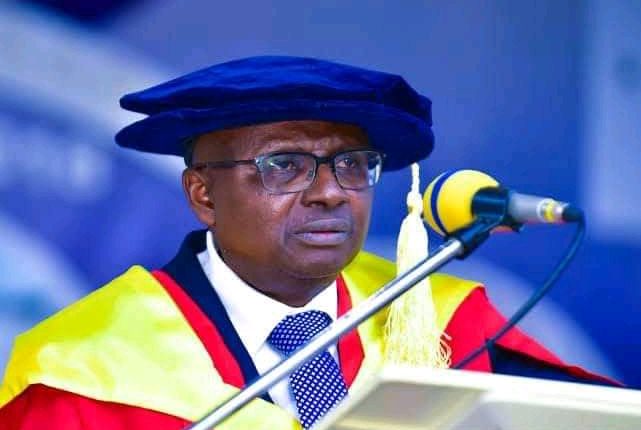 All is now set as Prof. Kayode Oyebode Adebowale takes over the mantle of leadership as the 13th indigenous Vice-Chancellor of the University of Ibadan from Monday 1st November 2021.

He was appointed by the University’s Council on the 14th of October, 2021 after a 13-month protracted succession crisis, following the tenure expiration of the 12th Vice-Chancellor, Prof. Abel Idowu Olayinka.

Prior to his appointment, Prof. Adebowale was the Deputy Vice-Chancellor (Administration).

However, with his appointment as the 13th indigenous VC, the Professor of Chemistry will be joining the best brains that have ever ruled Nigeria’s premier university.
Prof. Adebowale was born on 11 January 1962 in Ibadan, Oyo state. He completed his B.Sc in Chemistry in 1984; M.Sc in Industrial Chemistry in 1986 and Ph.D. in 1991.

The new Vice-Chancellor began his academic career at the Federal University of Technology, Akure (FUTA) in October 1991, as a Lecturer Grade II. He returned to UI in 1999 as a Senior Lecturer and rose through the ranks to become a Professor in October 2006. He had post-doctoral experience in Germany and Italy. His cognate administrative experience includes Dean, Faculty of Science, 2009-2011; Director Special Duties Office of the Vice-Chancellor, 2015-2017 and two-term Deputy Vice-Chancellor (Administration), 2018 till he was appointed.

He is a Fellow of the following learned societies: Science Association of Nigeria; Chemical Society of Nigeria; Polymer Institute of Nigeria; and the Nigerian Academy of Science. Outside the shores of the country, he is a Fellow Royal Society of Chemistry (UK); African Academy of Science (Kenya), and Alexander von Humboldt (Germany). He attended the Senior Executive Course (SEC) 39, 2017 of the National Institute for Policy and Strategic Studies (NIPSS), Kuru, Jos, leading to the award of mni. He is happily married with three children.

Prof. Adebowale whose five-year single tenure commences on 1 November 2021 will be completing his tenure in October 2026.
Meanwhile, all Heads of various Departments and Directors of Centres as well as other senior University officials have been invited to the inauguration service on Monday, 1 November 2021 at the Chapel of the Resurrection, UI by 10 am.

Professor Kenneth Onwuka Dike, was Ibadan’s first Nigerian Principal and Vice-Chancellor from 1960 to 1967. When Prof. Dike resigned in 1967 as a consequence of the Nigerian Civil War, he was succeeded by the late Professor T. Adeoye Lambo, who served as Vice-Chancellor until 1971.

Prof. H.O. Thomas was succeeded in December 1975 by Prof. Tekena N. Tamuno. Prof. Tamuno was the first alumnus of Ibadan to occupy the post of Vice-Chancellor. He served in this capacity until 30 November 1979, when the late Prof. Samuel O. Olayide of the Department of Agricultural Economics, was appointed Vice-Chancellor, a post he held till 30 November 1983.

Professor Ayo Banjo has the singular distinction of being the first, and to date, the only Vice-Chancellor of the University to serve for two terms, from December 1984 to November 1991.
Prof. A.B.O.O. Oyediran, a former two-time Head of the Department of Preventive and Social Medicine, College of Medicine and former member of Council served as Vice-Chancellor from 1 December 1991 till 30 November 1995. Professor O. A. Ojengbede, the then Provost, College of Medicine, acted as Vice-Chancellor from 1 Dec. 1995 to 24 March 1996.

Prof. Omoniyi Adewoye of the Department of History whose appointment as Vice-Chancellor commenced on 25 March 1996, served in that capacity until 25 March 2000. During the interregnum after Prof. Adewoye’s tenure, Prof. Olufunso O. Olorunsogo, the then Deputy Vice-Chancellor (Administration) was appointed Acting Vice-Chancellor from 26 March to 24 September 2000.

Prof. Ayodele O. Falase, former Provost, College of Medicine and Head, Department of Medicine on two previous occasions, became Vice-Chancellor from 25 September 2000- 2005.
He was succeeded by Prof. Olufemi Bamiro, 2005-2010. Prof. Isaac Folorunso Adewole of the College of Medicine took over from 2010 to 2015.

He handed over to Prof. Abel Idowu Olayinka of the Department of Geology who was the VC from 2015 to 2020.