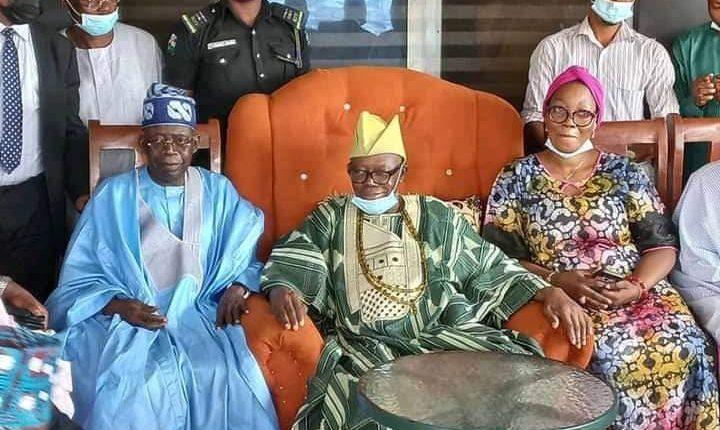 Presidential aspirant and National Leader of the All Progressives Congress, Bola Tinubu had yesterday visited the Olubadan of Ibadan designate, Dr Lekan Balogun in his Alarere residence. Tinubu had visited the traditional ruler to seek his blessings and support of Ibadan people on his presidential ambition.

Balogun, represented by his brother, Sen. Kola Balogun (PDP-Oyo South), said that the situation in the country currently, called for a leader that would further strengthen its unity.

He further stated that Nigeria needs a strong leader that would further strengthen its unity come 2023.

The Olubadan designate expressed that Yorubas are the leading light of Nigeria seeing how Tinubu had contributed greatly to the growth and development made in Lagos state. He stated that there are anticipations by Yoruba’s to have one of their own as President who will further strengthen and unite the country come 2023.

Tinubu expressed his readiness and determination, saying no intimidation or blackmail could stop him from pursuing his quest for the presidency.

It was reported that Tinubu had also visited the Alaafin of Oyo, Oba Lamidi Adeyemi III in his Oyo palace and received the royal fathers prayers and pledge of support.

40 Facts About Ibadan You’ll Want To Share With Everyone