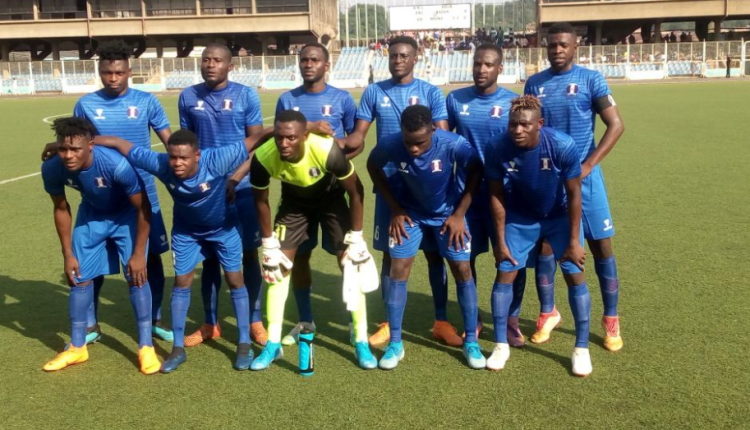 The Shooting Stars Sports Club (3SC) of Ibadan beat Go Round FC of Omoku 2-1 on Sunday afternoon in the NNL Group B1 Matchday 3 encounter decided at the Dipo Dina Stadium, Ijebu-Ode.

Despite being under pressure, the visitors shocked the homers with a beautiful goal, few minutes to the end of the first half. It was their first clear chance of the first 45 minutes.

Before the Omoku based side got the goal, 3SC had failed to convert the numerous chances that came their way, having dominated proceedings after a ding dong affair in the opening stages.

Having battled in vain to level up in the first half, the Waheed Omololu led 3SC, spurred on by the pep talk from the Oyo State Commissioner for Youth and Sports, Asiwaju Seun Fakorede, came into the second half like wounded lions, bombarding the visitors’ goal area for the equaliser

However, it was the visitors who almost doubled their lead minutes after the restart but goalkeeper Laide Okanlawon made a wonderful one-on-one save to keep the homers in the game.

A golden opportunity for the leveler came the way of 3SC when referee Uche Osondu awarded a penalty kick to the Stars after Gafar Olafmihan was brought down in the box.

Adebayo Abayomi stepped up to take the kick which was saved by goalkeeper Nwandu Chizoba.

The Ibadan soccer lords finally got the much-needed equalizer barely a minute after missing the penalty kick when right back Muritala Taiwo slotted in the ball from a goalmouth scramble.

The goal gingered the host as they swooped on their opponents in search of the second goal but they were undone by a stout defending by Go Round backline and the flexibility of goalkeeper Chizoba.

With time running out, the coach Edith Agoye led a technical crew of 3SC introduced Anthony Okachi for impressive Malomo and the substitution paid off as Okachi headed in a well-taken corner kick to seal a win for the Oluyole Warriors.

The visitors were punished for their acts of indiscipline which saw two of their players, Ngwu Onyedikachi and central defender Ezeala Christopher getting the marching order.

The team captain, Akaba Otega, had started it all, making uncomplimentary remarks while the teams were filing out, a development that nearly sparked off trouble even before the game kicked off.

The win over Go Round makes it three wins from three matches for the Oluyole Warriors and nine points from the possible nine.