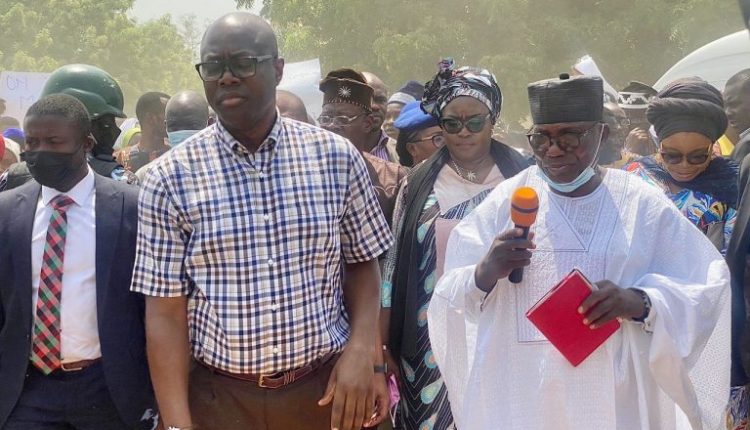 Oyo State Governor, ‘Seyi Makinde, on Friday, declared that the main focus of his administration is to ensure that no zone in the state is left behind in terms of development.

He added that his agenda to ensure security and fix the infrastructure deficit in the state remains on track.

Governor Makinde, who stated that his administration is aware that there is a nexus between good infrastructure, secure environment and development, said the state government would work with the local government to embark on a rehabilitation of the Eruwa/Maya Road in order to open the axis up to development.

Makinde, who made these known in Lanlate, Ibarapa East Local Government, during an on-the-spot visit to the area, equally announced that his government will release the sum of N136 million [One Hundred and Thirty-Six Million Naira] as grant to upgrade infrastructure at the Oyo State College of Education, Lanlate.

He said: “I came here to have an on-the-spot assessment of the challenges and the issues that this institution is faced with, which are not allowing the institution to fulfill its mandate.

“When I was campaigning to get elected as the governor of the state, I met this JAC leadership and the new chairman of JAC. We met in Oyo and we discussed. When we were putting together the Governing Council for the institution, I invited them and we sat on my dining table.

“We kept asking for their input.
“So, for us as an administration, we know and we confirm that we are not the most intelligent, so we want everybody to come on board.

“We want everybody to have something positive to add.

“We are not playing politics, we are not interested in APC or PDP, we are talking about an institution that was supposed to produce teachers that will train our children, who will secure our future.

“First, I must say that this facility that I have seen since coming in here is not up to standard.

“We are not ones to trade blames or to say oh, you are still being owed arrears from 2011. In 2011, I was contesting to go to the Senate and I lost. So, if you are owed from 2011 to 2021, that is 10 years and then you mentioned the arrears of promotion and also consequential adjustment to minimum wage. There are challenges but the approach to addressing those challenges matters.”

Governor Makinde, who stated that his government would do all within its capacity to address the arrears owed the staff of the institution from 2011, asked the staff members to show understanding and commitment, as Oyo State is their state.”

The governor, however, gave a condition for the institution to access the take-off grant, saying that stakeholders in the institution including representatives of the JAC, governing council, students and the Lanlate community must decide on how the money would be spent on (projects) that would make life better on the campus.

“You will identify projects that will lead to comfort on this campus. As soon as you have that committee set up, we will release the first tranche of N50 million.

“Finally, I want JAC to reach out to the staff and let them call off the strike immediately.

“And to the Lanlate Community, the main objective of this administration is that no zone or community in Oyo State must be left behind. So, for Lanlate, one of the things that we know for sure is, where you have infrastructure and a secure environment, development will follow.”

While addressing the demands of the Onilala of Lanlate, the governor said: “Kabiyesi, I have seen the note you wrote but, on my own, coming in, I saw that if we do a limited rehabilitation on the road in-between Eruwa and Maya, we would have created an avenue where investments can start flowing in here.

“The local government chairmen, I want to see from you an ‘authority to incur expenditure’ to do limited rehabilitation of that road and we will look forward to starting that.”

Earlier, the chairman of the Governing Council, Dr. Bisi Ojebola, appreciated the Governor Makinde-led administration for the support the institution has been receiving in terms of the prompt payment of salaries, the release of subventions and special support to the college, as well as the approval of a special grant for the completion of some of the institution’s structures.

Also speaking on behalf of the three unions in the College, Comrade Sunday Kolawole said that since the inception of the college in 2002, it has never witnessed the kind of support that the Makinde government is giving to it, especially in terms of the take-off grant.

“Your Excellency sir, historically this College came into existence in 2002, that means it is about twenty (20) years old now. It may amaze Your Excellency sir, that for that number of years, the College has never, we mean “never,” enjoyed the mercy of all the governments that have ruled this state in terms of any take-off grant.

“The administration of the late Governor Adebayo Alao-Akala started two building projects (School of General Education and Library) but they have since been abandoned by the contractor. But when you came on board, your government graciously approved the sum of Twenty Million Naira (20,000,000) for the completion of the long-abandoned School of Education Complex,” Kolawole said.

The visit had in attendance top government functionaries, the Onilala of Lanlate, His Royal Majesty, Oba Sunday Bolawaye Oladejo, and the member representing Ido/Ibarapa East Federal Constituency, Hon. Yemi Taiwo, among others.