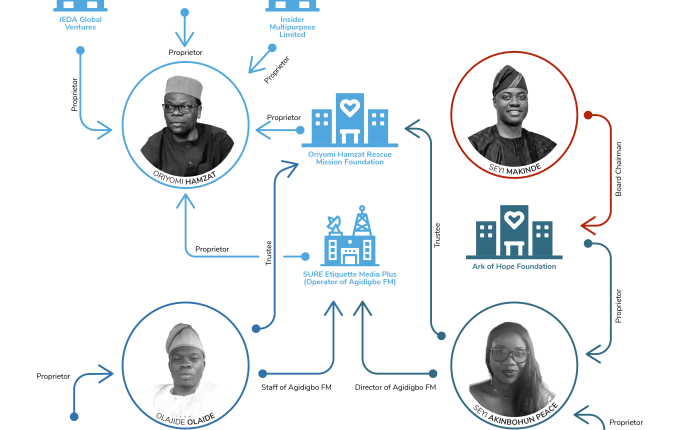 Oyo State government’s attempts to defend itself against the revelations in Dataphyte’s report of “Notebook Gate” has backfired spectacularly leading to even greater indictments on its public procurement processes under the current administration.

The Oyo state government through its Ministry of Information released a statement following Dataphyte’s report of bid splitting and contract inflation, to deny that the state awarded cost-inflated contracts.

The press release which was completely silent on contract splitting by Hamzat Oriyomi, claimed that contrary to the N2,100 cost reported by Dataphyte and republished by several news platforms including Sahara Reporters, stated the Oyo state government awarded the exercise book contract at N150 per copy and to 8, not four companies.

Governor Seyi Makinde, during his speech at the one-year anniversary of Agidigbo FM, Oriyomi’s Radio Station also did not comment on his friend’s violation of the public procurement law but swore to resign as Governor of the state if investigation showed the notebook contracts were inflated.

Following Dataphyte’s request for evidence to back the claims in the press release, the commissioner for information, Mr Wasiu Olatunbosun provided a list of the names of the contractors but referred Dataphyte to the state’s bureau of public procurement for details of the amount awarded to each contractor.

According to the Commissioner, the eight different companies who got the contracts were; Insider Multipurpose Ltd, SURE Etiquette Media Plus, JEDA Global Ventures, OPAL Multinational Resources Limited, ASP Integrated Ventures, PORSH Diversify Ventures, SEWA International Ventures and ICON Printing Press Consult. The Commissioner had stated that the state government awarded the contract in 14 lots to 8 contractors. He further noted 2.7 million notebooks were to be supplied at the price of N150-N180 by these 8 contractors.

While the information on the State’s Public Procurement portal did not tally with what the Commissioner claimed, his list exposed many fault lines in the state’s procurement process.

The state bureau of procurement must have missed the relationship between the governor and his friends who have since 2019 been awarded multiple contracts worth between 500 million and 640 million.

Contrary to the claim by Mr Wasiu, the contract awarded in December 2020 at N446,370,480 did not have 8 different contractors but four contractors – Messrs. Insiders Multipurpose Ventures (2); Messrs. Sure Etiquette Media Plus Limited (2); Messrs. Jeda Global Ventures (2); and Messrs. OPAL Multinational Resources (1) – split into seven contract lots.

Recall three of these four companies are owned by Hamzat Oriyomi and were awarded 6 out of the seven lots as shown below, an action that is against the public procurement law.

Each of the three sets had a uniform description of contracts as shown below.

The first set of twelve (12) awarded by the Ministry of Education on August 28, 2019 were described as Lots.

The only contract awarded by the Oyo State Education Trust Fund on August 28, 2019 was described with the “second batch” even though it shared dates with those described by Lots.

Of the 8 contractors on the list that the Commissioner provided to Dataphyte, 3 contractors are neither on the OCDS portal nor on any of the “customised exercise books for students of public secondary schools” projects. These companies are; SEWA Int’l Ventures, PORSH Diversify Ventures, ICON Printing Press Consults.

The state government’s award of twelve different contracts worth N456.504 million for supply of notebooks on August 28,  2019 however revealed the connections between all the companies on the commissioner’s list.

Five of the contracts, worth N194.2 million, were awarded to companies owned by and linked to Oriyomi Hamzat. The companies are; Sure Etiquette Media plus (two contracts) and ASP Integrated Ventures (three contracts).

Earlier, Oriyomi Hamzat had told Dataphyte that he did not bid for any contract with the state government, instead allowed some groups of persons to use his organisations for the notebooks contracts.

Company searches at the Corporate Affairs Commission by Dataphyte show the relationships and linkages of seven of the eight companies on the list to both Oriyomi Hamzat and the governor.

Four of the companies are owned by Oriyomi Hamzat, two are owned by Seyi Akinbohun Peace and one by Olajide Olaide.

Oriyomi Hamzat is also linked to ICON Printing Press Consults, another company that got the contract. The company was registered on September 1, 2020, just two months before the contract was awarded and the proprietor named on the CAC documents is Mr. Olajide Olaide.

Olajide Olaide is a member of the board of ‘Oriyomi Hamzat Rescue Mission Foundation’.

But that’s not the extent of his relationship with Mr Oriyomi as Olajide Olaide appears to also be a staff of Agidigbo FM. On September 9, 2021, the radio station wished Olajide a happy birthday and the description on the Agidigbo Fm branded birthday postcard was ‘staff’. He is also listed on Agidigbo FM website as a staff in the Engineering department of the radio station.

Another organisation given contract by the Oyo State government is PORSH Diversify Ventures, registered on September 4, 2020, and the proprietor as seen on the CAC portal is Akinbohun Seyi, who is also a member of  Hamzat Oriyomi Rescue Mission Foundation as well as a Director at Agidigbo FM owned by Mr. Oriyomi.

Our research also linked ASP Integrated Ventures, another beneficiary of contract award to Akinbohun Seyi who is listed on the CAC portal as one of the officers of the company.

Seyi Akinbohun also owns The Ark of Hope Foundation on which the current governor of Oyo State, Seyi Makinde sat as the Chairman, Board of Trustees as at December 2018.

Four of the seven companies related to Oriyomi and his cronies were registered between September 1 and 8, 2020, three months before the contract award.

One of the two companies owned by Seyi Akinbohun, was registered on September 4, 2020, three months before the award of contracts for notebook supply.

The company owned by Olajide Olaide was registered on September 1, 2020, also three months before the contract was awarded.

To recap, Oriyomi Hamzat owns four of the companies that won the supply of notebooks contract and has links to three of the other companies who won the contract awards. The governor has also openly declared Hamzat Oriyomi as a close associate who, even before he emerged as governor of Oyo state, constantly offers ‘advice’ to him and stays constantly in touch. The proprietor of one company that won the state’s contract is not only directly linked to Oriyomi Hamzat but to the governor of the state himself.

The multiple connections that are revealed from the list of eight companies provided by the State Commissioner for Information, Mr. Wasiu Olatubosun, would serve as a good example for lessons in understanding what Beneficial Ownership means in a practical sense.

That some of these companies engaged in split bidding and could not possibly have procurement experience given that they were established a mere 2 months before the contract awards only further contextualises the problematic nature of Beneficial Ownership and importance of Open BO Registers and Open Contracting and Procurement.

The Executive Director of the CISLAC, Auwal Ibrahim Musa told Dataphyte that the procurement process has become a rubber stamp issue in Nigeria with politicians awarding contracts to their friends. He noted that the government has undermined the Bureau of Public Procurement council which should be impartial leading to collusion on contract awards and less effectiveness of enacted public procurement laws.

In awarding contracts to the companies above, the state government and Oriyomi breached Section 22 8(g) of the Oyo state procurement provisions  and these issues raise questions on accountability, equity and probity in public procurement of Oyo state.

Section 22(1) of the Public Procurement Act encourages competitive bidding and states a condition for bidding as; “by open competitive bidding; in a manner which is transparent, timely and equitable for ensuring accountability and conformity with this Law and regulations” .

However, it remains unclear why owners of seven out of the eight companies that won contracts for supply of notebooks on December 17, 2020 and five out of the twelve contracts awarded for the supply of notebooks on August 28, 2019 are connected as well as having direct ties with the governor or why companies owned by same persons were awarded multiple lots in the contracts, especially with the presence of many other firms in Oyo who could benefit from same contract.

When defending himself earlier, Oriyomi told Dataphyte that he couldn’t have bidded for contracts for the supply/production of notebooks in the state, especially as he does not own a printing press and is not into printing. And he is right, by his own admission, his companies should not have won these contracts.

The entire procurement process also breaches the  Oyo state public procurement laws in the award of contracts to companies that have subordinate relationships with each other.

Oyo state’s own Public Procurement act, 2010, page 68, Section 22 (8g) states that a certificate of no objection may not be issued for award of contracts if;

Except, there is evidence of the declaration of these conflicts and justify the issuance of certificates of no objection despite these gaping conflicts,  the state is again culpable.

The fact that the governor appoints members of the Oyo State Public Procurement Council and the Special Adviser to the governor on Due Process is by law expected to be the head and chief executive officer of the Council raises major concerns of conflict of interest.

Government Officials, BPP and Oriyomi Failed to React to Findings

Dataphyte reached out to Oriyomi Hamzat to get his reactions to the new findings, but he declined comments on the development.

The commissioner for Information, Wasiu Olatunbosun, who provided the list that led to more revelations also declined to comment on the findings and pointed Dataphyte to the State Bureau of Public Procurement.

When contacted, the Oyo state Education Commissioner, Abiodun Abdu-Raheem, told Dataphyte that he aligns only with the press statement released by the government, declining to make comments on the development.

Two days before he made the above comment, he had told Dataphyte that he is not expected to have the contract details having been appointed only in October, 2021.

“How do you expect me to have the contract details, I have only been appointed in 2021”. He quipped.

When he was reminded that governance is a continuum, he asked that our reporter call back in another two days. When he was called back, he “aligned” himself with the “press release”, and had nothing to say.

When told that the findings are because of the contractors’ list provided by the state’s Information Commissioner, he referred our reporter back to the commissioner.

“Ask the Oyo state commissioner for Information for that clarification.”

When contacted, the spokesperson for Governor Seyi Makinde, Taiwo Adisa declined to comment, referring our reporter back to the Commissioner for Information.

“Since the commissioner gave you the list, you can refer questions to him as well,” he said, regarding the list of contractors sent to Dataphyte.

A mail was sent to the Oyo Bureau of Public Procurement seeking clarifications on the award of contracts to companies owned by and linked to the same person but the mail did not receive a response. Calls to the official number of the Bureau also did not yield any result as the respondent refused to comment on the development.

A mailed request for details disclosing the process of contract award, documents that provide evidence of lots, amount of contract details and state BPP certificate of no objection to the contract awards from the Oyo state Bureau of Public Procurement has also not been responded to.