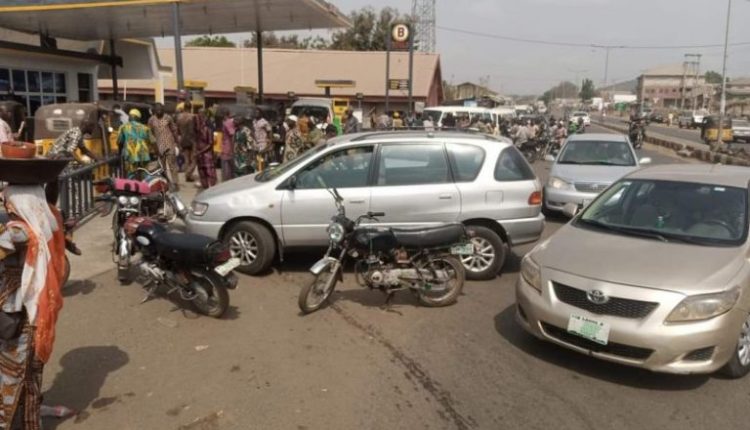 The leadership of the Nigeria Union of Petroleum and Natural Gas Workers, NUPENG has issued a 24-hour ultimatum to oil marketers in Oyo state and nationwide to revert to the official pump price of N165 per litre or face the wrath of the union.

The President of the Union, Comrade William Akporeha and the general secretary, Comrade Afolabi Olawale made this known in a press release on Sunday.

According to the union, the 24-hour ultimatum takes effect from the midnight of Sunday, 27th of February and erring marketers would face heavy sanctions from the Union.

“We are giving these marketers 24 hours with effect from midnight of Sunday, 27th of February, 2022 to revert to the official rate of N148.77 or we shall name and shame them as public enemies aside from other sanctions.”

The ultimatum, they said, became imperative following the continued use of scarcity of fuel as license to dupe innocent motorists. They noted that it was also disturbing that even though AGO, ATK and DPK were deregulated, there must be some measures of checks and control over the prices, otherwise, the entire productive activities would be grounded.

“We have it on good authority that its one marketer that determines and fixes prices of these products for other marketers to adopt, leaving all consumers (domestic and industrial) at their mercy. This unsavory situation is evidently clear from the cries of the airlines operators, road transport operators, factories owners and private homes and offices.

“NUPENG cannot continue to watch as some cabals keep on exploiting the people and the nation. We implore the general public to bear with us in whatever actions we deemed necessary against these exploiters,” they said.

The union said: “Painfully, we noticed the helplessness of the NNPC in this in view of the implementation of the Act and also noted that these marketers are taking advantage of the newness of the Nigerian Midstream and Downstream Regulatory Authority to rip off Nigerians.

“We are also by this press release directing all our officials in all our zones to start compiling lists of petrol stations that are in habit of hoarding products during the day and selling at nights at exorbitant rates for possible sanctions. These also include; Petroleum Products depots that may want to be hoarding products because of our decision on this matter.”