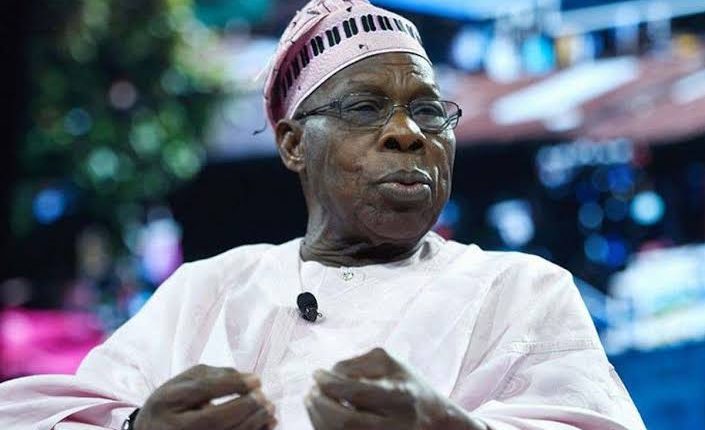 Former President Olusegun Obasanjo has asked the national leadership of the Peoples Democratic Party to consider the pedigree of those aspiring to lead the country in 2023 before picking its presidential candidate.

Obasanjo, who hosted the members of the National Working Committee of the party at the Olusegun Obasanjo Presidential Library on Thursday, said the party should also look at the way the president of the United States of America emerges from the two dominant political parties.

The former chairman of the Board of Trustees of the party, was visited by the members of the party’s National Working Committee led by its Chairman, Prince Uche Secondus.

On February 16, 2015 and in a dramatic turn of events, Obasanjo ended his 17-year relationship with the party by publicly tearing his PDP membership card, but refused to join any other political party.

In July, he insisted that he was done with politics, denying claims that he was planning to float a new political party.

A reliable source, who was part of the Thursday meeting , said the PDP leaders told the former President not to “siddon look” during this critical time.”

The PDP source said, “We went to him and told him not to ‘siddon look’ as things are getting worse in the country. We also reminded him that the PDP gave him the platform that made him the president and also served as its chairman of BoT. Therefore, we asked him not to be unbothered about happenings in the party and the polity.”

Though the former president was said to have reiterated his earlier position of no interest in belonging to any political party for now, he was also said to have counselled his guests on the need to settle their rifts and focus on the task of producing a nationally-accepted presidential candidate in 2023.

The source told Sunday PUNCH that Obasanjo expressed gratitude for the PDP chieftains’ visit, adding that they needed to think about how to face the future as a party and concerned Nigerians.

“Obasanjo said we should go and study how presidents emerge in America. He said leaders emerge through processes and that those leaders must have seen, learnt, practised, and taken part in leadership processes. He said in the US, the people followed a particular pattern.

“He said we should not pick anyone just because such a person has money. He also said in America, they follow a particular pattern. He said the presidential candidate in the US emerges either from the Congress, from the Board of Governors, or he is an established businessman.

“He also told us about the way the prime minister of the United Kingdom is elected. In all, he said someone who knows the country, the system, is knowledgeable in foreign affairs, economy and security, among others, should be allowed to lead the nation,” the source said.

It was also gathered that Obasanjo expressed his worry about the way the country had been busy accruing debts by borrowing money all over the world.

The former president was said to have informed his guests that, while he was in office, governors always informed him about how much they had been able to attract as foreign direct investments into their states.”

Obasanjo meets Secondus behind closed doors, asks others to excuse
When it was time to discuss the crisis rocking the party over moves by some party leaders and governors led by the Governor of Rivers State, Nyesom Wike, to either shorten the tenure of the Secondus-led NWC or deny the members opportunity of contesting for second term, the former president reportedly asked all his guests to excuse him as he met with Secondus.

A crack had emerged in the PDP NWC two weeks ago, after the resignation of some officials and calls for Secondus’ resignation by some committee members.

Leaders of the PDP comprising governors, BoT, and National Assembly caucus, however, intervened a few days ago to save the opposition party. After a resolution of the crisis, the PDP leaders agreed that the party’s national convention should hold in October to elect a new leadership.

Saturday PUNCH learnt that the meeting between Obasanjo and Secondus, which lasted for about seven minutes, centred on how to resolve the crisis and also have a crisis-free national convention.

“Nobody could say what the two men actually discussed as none of us at the general meeting were called in when the two men met,” a source added.

It was also gathered that the former president met Ogundele on how to strengthen the party in Ogun State.

When contacted, Secondus confirmed the meeting with the former President.

Though he said the former President “is the father of the nation and a man respected globally who was elected as President of Nigeria on the platform of our party,” he refused to give further details on issues discussed at the meeting.

Meanwhile, there are indications that the national convention of the party may not hold in October as proposed by the party’s National Executive Committee at its last peace parly organised by the BoT.

Investigations by Saturday PUNCH showed the party has pending state congresses in at least nine states. Some of the states are Lagos, Oyo, Plateau, Adamawa, Kebbi and Osun. The party has also yet to conduct congresses to fill vacancies in the North-West zone.

In a televised interview on Tuesday, Wike argued that the party’s current NWC was incapable of leading the party to victory in 2023, citing the clamour among party members for a change in its composition in order to inject fresh blood.

A source who spoke to Saturday PUNCH said, “Holding a national convention either now or in October without carrying out due diligence concerning congresses in the affected states and the zone means that the states will not have delegates to the national convention. This is dangerous and could trigger another round of court processes that could affect the party in future.”

Besides, it was also gathered that there was no way officers elected would take office without the end of term of the current NWC members whose tenure expires on December 9.

A member of the party’s BoT also said it might be difficult to hold the convention as suggested at the party’s meeting.

He said, “Governorship election is coming up in November this year. Then, we need to give the Independent National Electoral Commission 21 days’ notice before we can even hold any congress. We also have to do that (inform INEC about holding states congresses) in the affected states as well. And the party’s constitution does not favour or allow having a caretaker committee.”

First to meet on Wednesday was the party’s former senators’ forum, whose meeting held at the Transcorp Hotel, Abuja.

Among the former senators at the meeting were three former presidents of the Senate produced by the party, namely Pius Anyim, David Mark and Bukola Saraki. The Governor of Bauchi State, Bala Mohammed, and Senator Dino Melaye were also present.

Though it was gathered that the meeting discussed how to protect the interests of members in the party and also starve it of what a source described as “vultures that are bent on hijacking it to serve the interest of a few in 2023.”

Apart from these two “emergency” caucuses, the party also has other caucuses like the National Assembly caucuses, House of Representatives caucus, Senate caucus, former ministers’ forum, former national officers’ forum and others. The party only recognises the National Caucus, whose members usually meet ahead of the party’s NEC meeting.

Though not all the members of the caucuses are statutorily delegates to the party’s national convention, it was also learnt that they might take a common decision on the crisis in the party.

Ekiti PDP gov candidate emerges Jan 28, 2022
However, there are indications that the PDP candidate in next year’s Ekiti State governorship election will emerge on January 28, 2022.

A document signed by the PDP National Organising Secretary, Col Austin Akobundu (retd), showed a table of events, which included a governorship primary election set for January 28, 2022. The document stated the Electoral Committee would oversee the poll.

Other events listed were appeals on governorship primary (February 1, 2022), presentation of certificate of return (February 2, 2022), and certification of deputy governorship candidate by NWC and compilation of documents (Feburary 3).