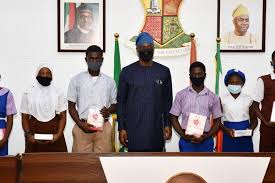 Official: Our Interventions On Education Has Paid Off As Oyo Moved From 26th Position To 11th In WAEC – Makinde

Oyo State Governor, ’Seyi Makinde, on Tuesday, said that his administration will continue to judiciously utilize the resources of the state for the good of its people.

The governor, who was speaking through the Head of Service, Alhaja Amidat Agboola, at the year 2021 Public Service Forum, with the topic: “The Millennial Public Service: Springboard from Poverty to Prosperity”, held at the Theophilous Ogunlesi Hall, UCH, Ibadan, said that the welfare of the workers and pensioners are germane to his administration.

A statement by the Chief Press to the governor, Mr. Taiwo Adisa, quoted Makinde as saying that the transformation of any society or system depends on the effectiveness and efficiency of its civil/public service.

He said: “I feel highly delighted to be in your midst this morning on the occasion of the year 2021 Annual Public Service Forum. Let me join the Head of Service to welcome all Civil/Public servants to this year’s event which should have held last year but for the Covid-19 pandemic.

“As the current head of the leadership structure in Oyo State and with the resources of the entire State in our care, we made a pledge to judiciously use these resources for the good and benefit of the entire citizenry. This we have always done and we shall continue to do. Since the inception of this administration, I can boldly say that the welfare of the workers has been germane to us and we have never desisted in exhibiting this.

“The Public Service is one of the agents of development in any nation. The transformation of any society or system depends on the effectiveness and efficiency of its Civil/Public Service, particularly, the developing societies.”

He maintained that despite economic situation of Nigeria, his government has been paying salaries and pensions on or before the 25th of every month, noting that regular payment of salaries, allowances and pensions have not stopped various projects embarked upon by his administration.

“Despite the economic situation in the country, we have always paid salaries and pensions on or before the 25th of every month. Let me reiterate that payment of salaries to workers is not a privilege but a right, for every worker deserves to be paid after rendering services.

“I am glad to inform you that regular payment of salaries, allowance and pensions have not stopped various projects that we have embarked on.
“Recently, we inaugurated the construction of the Iseyin campus of the Ladoke Akintola University of Technology with the release of a sum of Five Hundred Million (N500,000,000.00) as a take-off grant.

“We have also approved the construction of 76.7kilometres Iseyin-Fapote-Ogbomoso road for a sum N43.1billion. This we believe will aid the movement of staff and students between the two campuses of the Ladoke Akintola University of Technology.

“This administration since inception has made education a priority as the sector has taken the highest share of the budget for the third consecutive year. This Sector was allocated the sum of N54.1b, amounting to 18.37 per cent of the year 2022 budget,” Makinde said.

He explained that the allocation of 21 per cent of the year 2021 budget has yielded result, moving Oyo State from 26th position to 11th position in examinations conducted by the West African Examination Council (WAEC) .
He added:

“Currently there is an ongoing recruitment exercise for Officers to fill the vacant positions of Permanent Secretaries, Executive Secretaries and General Managers in the Civil/Public Service of Oyo State and we are strictly basing our selection on merit. This is one of the proofs that this administration is interested in merit and give honour to only those who deserve it ”

Earlier, the Head of Service, who was represented by the Permanent Secretary, Civil Service Commission, Mr. David Olatunde, said that the Public Service Forum is organized to contribute to the development of institutional, human and technological capacities of public sector Institutions and Civil/Public Servants, to efficiently deliver public goods and services to the entire citizenry.

She explained that the best practice in the Civil/Public Service today is tending towards professionalism where all Officers are expected to improve themselves through acquisition of relevant additional academic and professional qualifications, as well as being abreast of and acquainting themselves with contemporary issues.

She appreciated Governor Makinde for his commitment towards improving the living standard of the workers and pensioners in Oyo State, urging the civil servants to reciprocate the gesture by putting in their best always.
Similarly, in her lecture, the retired Federal Permanent Secretary, Deaconess, Joan Ayo, who was the guest speaker, explained that no nation develops beyond the capacity of its public service.

She maintained that the core values of Public Service include: political neutrality. meritocracy, integrity, impartiality, patriotism, professionalism, discipline, accountability, transparency and anonymity, adding that by imbibing those values, the state’s civil service would be able to lift the state from poverty to prosperity.

Makinde: We’ll Continue To Utilise Oyo’s Resources For Our People