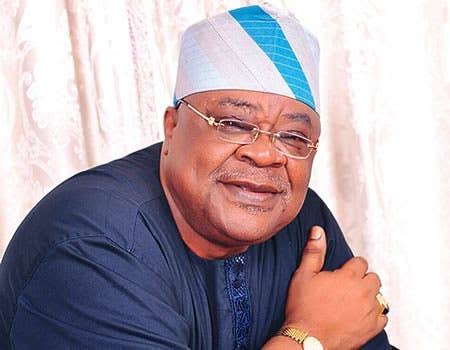 The people’s Democratic party (PDP) in Ogbomosho has described the former Oyo state governor and APC chieftain as a political prostitute and desperado always seeking to be relevant in the political atmosphere of Ogbomosho North.

The Chairmanship candidate of the People’s Democratic Party, PDP in Ogbomoso North Local Government Area, Hon. Kabir Ayoade made these assertions on Saturday in a statement through his Special Assistant on Media and Publicity, Dr Ayomide Adetoyese.

Recall that the All Progressive Congress chieftain had boasted about his political relevance in the Ognomosho area in a Friday interview, stating that if elections were to be conducted in Ogbomoso North, nobody could oust his leadership there.

According to Akala, the current governor of Oyo state; Engr Seyi Makinde’s influence cannot guarantee the PDP or any other party a win in the area should the APC be allowed to participate in the May 22 Local Government poll.

He said the PDP candidate from Aguodo/Masifa cannot win even a Councilorship election, let alone a chairmanship election. He said this was because his own candidate representing Ogbomoso North Constituency, Wumi Oladeji is the clear favorite there.

Reacting to the statement, the spokesman of the PDP candidate in Ogbomoso North said he finds it grossly irresponsible that an acclaimed leader who is supposed to be a father to all is trying to divide the people of Ogbomoso along religious lines and sentiments for his own evil agenda.

He further went on to say that the statement revealed that the recent statement by the APC man is a true reflection of who he is; a propagator of hatred and lies.

“Otunba Adebayo Alao Akala is nothing but a political prostitute who jumps from one political party to another to capture power, from PDP to Labour Party, ADP, and now APC, this singular act and old age has made him amnesiac, what a shame!”

The statement reads: “Our attention has been drawn to a recent interview granted by the former Governor of Oyo State, Otunba Adebayo Alao Akala to IATV Africa, casting aspersions on the choice of the PDP’s candidates for the post of Chairman and Vice Chairman Ogbomoso North Local Government, in the coming Oyo State Local Government Elections.”

“To start with, we find it grossly irresponsible that an acclaimed leader who is supposed to be father figure to all is trying to divide the people of Ogbomoso along religious lines and sentiments for his own evil agenda.”

“The people of Ogbomoso North Local Government and the entire town in general live together in peace and harmony regardless of the differences in religion or philosophical ideals. Therefore, Alao Akala’s comments are inciting as they are capable of causing unnecessary unrest in a peaceful society.”

“It is very important to state that leadership is about capacity and acceptance. It is about who can get the job done and who is well accepted by the people, the original owners of the mandate. Insinuating that Hon. AyoAde Kabir and Alhaja Oritoke candidature is faulty because of their personal faith and religious beliefs is beneath acceptable for an acclaimed leader. Otunba Akala and his cohorts no doubt, are determined to disrupt the peaceful co-existence of the good people of Ogbomoso Land.”

“Akala’s recent actions do not come to us as a surprise. It is only a confirmation of what everyone already knows. Otunba Adebayo Alao Akala is nothing but a political prostitute who jumps from one political party to another to capture power, from PDP to Labour Party, ADP, and now APC, this singular act and old age has made him amnesiac, what a shame! In his desperate attempt to impress his Lord at Lagos, he is forced to speak and proclaim relevance where he has none.”

“Akala is the lead actor in this theatre of the absurd. He thinks so highly of himself that he has forgotten the history. Hon. Akanji Kabir AyoAde contested the 1999 Local Government Election under the then AD as councillor against the anointed candidate of Otunba Akala, in an election he contested in as a chairman under APP. Hon. Akanji Kabir AyoAde did not only defeat Akala’s candidate but also went ahead to become the Minority Leader of the Council. Where was Hon. Wumi Oladeji then?”

“Alao Akala is a bad student of history. He has proven beyond reasonable doubt that he belongs to the class of people who do not learn from past events and that is why history keeps repeating itself with him. During the 2019 gubernatorial electioneering campaign era, Akala stated that Governor Seyi Makinde who has not won any elective position in the past would not win the election. Guess who went on to become Number 1 Citizen of Oyo State today. We are supremely confident that the Governor’s good works and high performance will earn him a resounding victory come 2023.”

Oyo PDP Reconciliation : Only Gov. Makinde And I Can Sit Together To Resolve The Issue He Intentionally Created – Olopoeyan Tells Arapaja