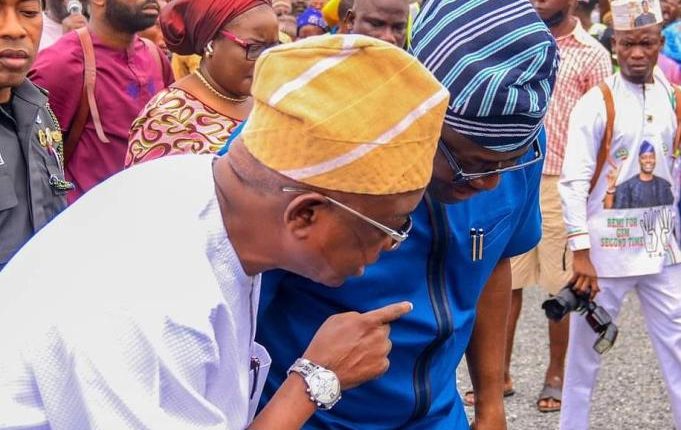 Michael Okunlade, chairman of the Social Democratic Party, SDP, in Oyo State, has described Seyi Makinde, as a liar.

According to a report by OYOINSIGHT the former majority leader of the Oyo Assembly who, together with others, left the Peoples Democratic Party, PDP, after many months of running battle over neglect in the running of the administration of the state by the governor was reacting to allegation by Makinde that he had no knowledge how his former deputy, Raufu Olaniyan, became his running mate in the 2019 election.

Okunlade, who hails from the same Igboho, headquarters of Oorelope local governor with Olaniyan, who is a retired permanent secretary, revealed he was part of the deal that led to his emergence as number two man.

According to Okunlade, “Governor Makinde is mendacious and a great falsifier of the truth. On the final day, when the decision was reached that Engr. Raufu Aderemi Olaniyan was to be his running mate for 2019 gubernatorial election, he (Makinde) was physically and personally in attendance at that meeting. It was a chain of events including talks, negotiations and interface culminating in the eventual offer and acceptance of Engr. Olaniyan. Critical stakeholders at the meeting were Chief Jacob Adetoro (Igbeti), Hon. Adeniyi Farinto (Iwajowa), Chief Bisi ilaka (Oyo) and Hon. Bayo Lawal (the present commissioner for special duties from Ibadan.)

“As an eyewitness, I make bold to say that Governor Seyi Makinde was highly impressed with the credentials of our Engr. Olaniyan to the extent that he made commitments to him. He said the state was going to be run as if they have two governors in the state. That Engr. Olaniyan will be in charge of the administration while he would handle the economy.

“He also adopted all the manifestos compiled by Engr Olaniyan. It is an encyclopedia of all manifestos of gubernatorial candidates in Oyo State. You can see and feel the touch of that technocratic inputs in that manifesto. I can bet you, it’s the mother of all manifestos.

“The meeting lasted till 3 am on the said day and the venue was Davies Hotel, Bodija, Ibadan.

“I remember I wanted to go home that night but Engr Olaniyan said I should wait. I waited downstairs till the meeting lasted. Thereafter, I was fully briefed.

“On another occasion at the Premier Hotel, Ibadan, Gov. Seyi Makinde revealed to all members of our party what transpired at that meeting. He added that he was lucky to have an experienced administrator as his deputy and he can never be a spare tyre. I am certainly sure that posterity will judge.

“I am not saying this to curry favor from anybody. I am pleased with the favor God has done in my life. I’m content with the blessings I have been enjoying so far.

“I have an independent mind and sometimes Engr. Olaniyan and myself do disagree, but such disagreements were always with decorum and usually based on principle.

“I will reveal more if and whenever the need arises.

“Even as a state legislator serving under late former governor Adebayo Akala, I used to state my personal opinions and I protected my independence of opinions,” he added.

Bayo Adelabu, Folake Olunloyo, Concord School, Others to Lose Property as Family Moves to Reclaim Over 200 Plots of Land in Oluyole