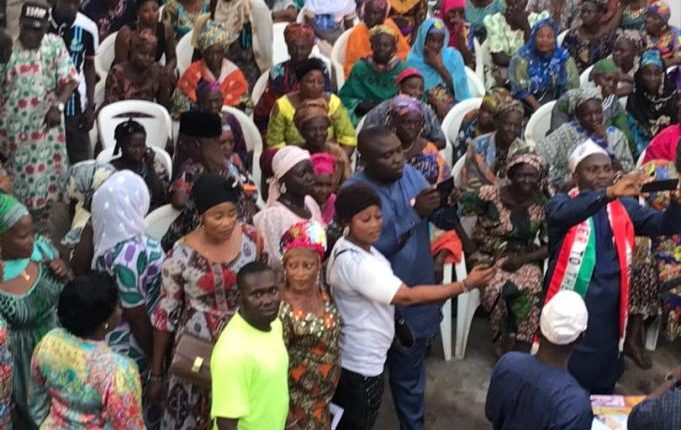 Olopoeyan while addressing his loyalists and some party excos from Ibadan Northeast and Southeast local governments, he thanked them for the love and support they have been giving to him so far, assured them of political dividends.

Olopoeyan urged his loyalists not to feel disappointment since they have been neglected and were unable to get reward from government of governor Seyi Makinde which they labored for.

As you can all see, all of them got to power and betrayed us, we championed the course for them, during raining and in hot sun, day and night, we were there for them before and throughout the campaign in 2019 , after wining the election, they neglected us, determined to reduce our strength, but God is with us, we never felt their absence. Even those who are nobody and available during the struggle are now the ones enjoying our sweat.

Today, I want to give out cash to as many as possible to boast their businesses and also as a start up capital for some people who wish to go for small scale business. Even if we are not in government, we can still do many things to make life meaningful to ourselves.

There is an issue between me and governor Makinde, thou, created by him but some people who had never won an election in their polling unit now standing as leaders, using the avenue to sideline my loyalists and party excos belonging to me in some local governments, they said all of you are not entitled to get reward from government you worked for its victory, am not bothered, let them continue, all of them will regret their actions.

I heard they screened out my loyalists names from a list, as beneficiaries of Hon. Agboworin’s empowerment, thou, I got information that, Abass Agboworin knew nothing about it, but an handiwork of this same caricature people calling themselves leaders in my local government, just leave them with the problems, today, had already added all those that they removed their names to my own empowerment list and am giving them what they are to give them there, in as much we didn’t wish them bad, we will always exceed them politically.