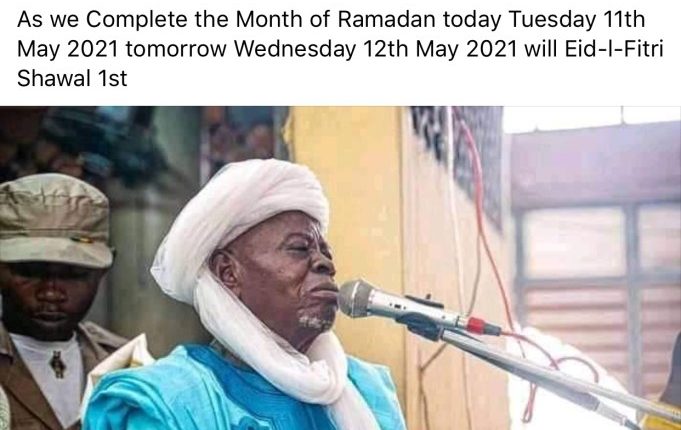 Recall that this Newspaper had earlier reported that the moon was not sighted by authorities last night, making the Ramadan month to extend to 30.

But in a latest Development in Ibadan, a video sighted by Akéde were the chief Imam of Ibadan Land was seen performing the Eid prayers.

Watch the VIDEO Below…

Without any evidence, a Facebook post on Agbotomokekere page yesterday morning had announced that Ramadan ended yesterday and he was go to lead the Eid prayer Wednesday morning.

True to his promise, Agbotomokekere led some Muslims to Eid but with many notable religious leaders like the Olubadan of Ibadanland, Oba Saliu Adetunji, Aare Musulumi of Yorubaland, Edo and Delta States, Alhaji Dawud Makanjuola Akinola De-Damak, former governor Rashidi Ladoja and others missing.

Source said that three years ago, when similar event happened, late former governor Abiola Ajimobi, De-Damak and others were missing.

Buhari Must Resign Or Step Aside Now, Says Afenifere Leader—Adebanjo