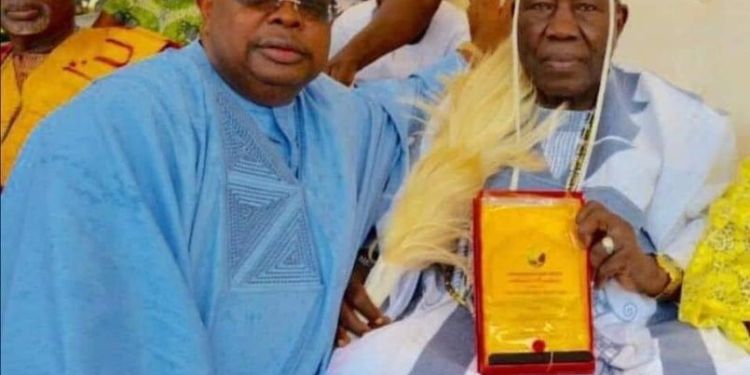 The Olubadan of Ibadan land, Oba Saliu Akanmu Adetunji has conferred the Mogaji title of Oguntegbe family in Labo area of Ibadan to a former gubernatorial aspirant of the All Progressives Congress (APC) Engr. Joseph Olasunkanmi Tegbe

Tegbe had contested for the APC gubernatorial primary along with others of the party in 2018 but failed to emerged as the party flag bearer.

Prior to the APC primary in 2018, some indigenous sons and daughters of Ibadan had alleged that Tegbe is from Delta State, therefore he can’t rule in Oyo State.

But the Olubadan who described Tegbe as a “beloved son of Ibadan,” said that the installation has ended the controversy surrounding Tegbe’s indigineship.

The monarch, while installing Tegbe alongside three other Mogajis on Monday, said, “Tegbe is our beloved son”.

Tegbe, while speaking noted that the installation has clearly ended the controversy surrounding his indigineship.

He said, “My installation has revalidated the obvious, that the man who has his origin here is from Edo, Delta. We are revalidating the obvious about the serious allegations.

“I am very grateful to the Olubadan and the entire Olubadan in council for honouring me; for installing me as Mogaji of Oguntegbe family in Labo Ibadan which further confirmed some of the things we have been doing in Ibadan.

“This is just the beginning of the good things to come to my family and Ibadan land”.