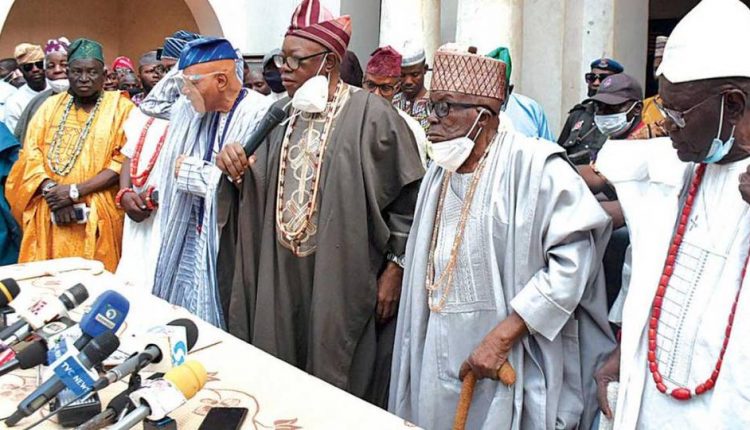 The Olubadan-in-Council has given conditions to be met by anyone aspiring to hold chieftaincy title in Ibadan land.

They said any aspiring Baale, Mogaji and Jagun in Ibadan land must pass an integrity test and possess record of past contributions to the ancient city before their appointment can be ratified.

This was part of the resolutions made during a meeting of the Council, held at the Alarere residence of the Olubadan designate, Dr. Lekan Balogun, on Monday.

Otun Balogun of Ibadan land, High Chief Tajudeen Ajibola, who briefed journalists after the meeting, said the decision was in tandem with the policy of the new Olubadan that Ibadan chieftaincy titles would not be for sale during his reign.

Ajibola explained that to drive home the point, every aspiring Baale, Mogaji or Jagun would be screened by members of the Olubadan-in-Council before their appointment can be ratified.

Other issues addressed at the meeting, according to the Otun Balogun, were the coronation ceremony holding next week and the ensuing promotion of High Chiefs in the Olubadan line, occasioned by the elevation of Otun Olubadan (Balogun) to the Olubadan stool.

He said that the meeting, at the instance of the new Olubadan expanded the coronation committee, with the nomination of High Chiefs Lateef Adebimpe, Olubunmi Isioye, Abiodun Kola-Daisi and Hamidu Ajibade- Osi Balogun, Ekerin Balogun, Ekerin Olubadan and Ekarun Olubadan respectively.

The Oniroko of Iroko, Ismaila Abioye and Baale Ajia Olorungbuji, Oladepo Suleiman, were also nominated as new members of the coronation committee.

Their names would be sent to the state government for as new members of the committee, Ajibola said.