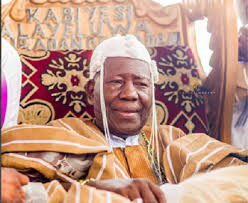 Olubadan To Be Buried According To Islamic Rites ― Aide

The media aide to late Olubadan of Ibadanland, Oba Saliu Adetunji, Mr Adeola Oloko, Sunday, disclosed that the late monarch will be buried according to Islamic rites today (Sunday) by 4 pm.

Adetunji also noted that Ibadan witnessed many accounts of achievements during the reign of the late monarch.

Oba Adetunji, joined his ancestors in the early hours of Sunday, at the University College Hospital, UCH, at the age of 93.

Oloko, while speaking on the passing of the monarch in a chat with Vanguard, said Oba Adetunji, would be greatly missed for being a peace-loving king.

He said: “Ibadan recorded so many accounts of progress during his time. He will be surely missed.

“He was a peace-loving king, very humorous, respectful, humble and very jovial.”

“He died in the early hours of today at exactly 1:00 am at the University College Hospital, UCH at 93 years.”

“He will be interred today at 4:00 pm at his Popoyemoja palace, according to Islamic rites,” Oloko disclosed.

Late Oba Adetunji, ascended the throne as the 41st Olubadan of Ibadanland on Friday, March 4, 2016.