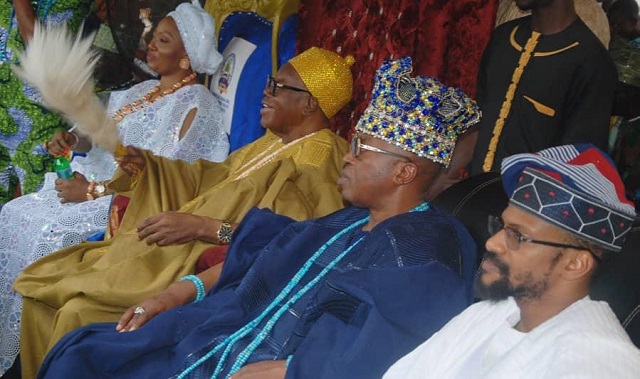 Oluwo of Iwo Joins Olubadan, Others To Commemorate 2022 Aliiwo Day

Oba AbdulRashid Akanbi Adewale Telu I, the Oluwo of Iwoland, Osun State, has on Saturday joined the Olubadan of Ibadanland, Oba Lekan Balogun Alli Okunmade II, prominent sons and daughters of Aliiwo as well as other dignitaries to celebrate the 2022 annual Aliiwo Day at the ancient Aliiwo palace, Agodi-Gate in Ibadan.

While praising the old Ibadan warriors for their gallantry at the famous Jalumi war, the monarch said it signifies till date the freedom being enjoyed by the sons and daughters of Yorubaland.

He recalled that but for the bravery of Ibadan warriors ably supported by other warriors from different towns in Yorubaland, the Fulani would have overran the present day Yoruba Nation and subjected them to the whims and caprices of the Fulani warlords.

Similarly, Oluwo expressed gladness at the occasion, describing his presence as home-coming and a further testimony of the bond existing between Iwo and Ibadan in general and Iwo and the present Olubadan in particular.

In the meantime, the President-General, Central Council of Ibadan Indigenes (CCII), Prince Oluyemisi Adeaga in his remark, according to a release made available to journalists by Oladele Ogunsola, the Personal Assistant (Media) to the Olubadan, stated that he was happy with the presence of Oluwo and Olubadan at the event.

In his words: “The presence of the two monarchs signified that an end has come to the problem between Ibadan and Iwo over land.

“What’s the business of Yoruba at the National Boundary Dispute Resolution Committee, when we can resolve whatever may be contentious among us amicably in view of our brotherly love and oneness? I had thought of going to Iwo to see Oluwo over the land dispute between the two brothers (Iwo and Ibadan) and you can only imagine how happy I’m that Oluwo is around”, he added.

Prince Adeaga further took the opportunity to appraise the performances of the representatives of the people, who are of Ibadan extraction at the legislative level of governance in the country and awarded them distinction, saying: “Our representatives are very very responsible. In any examination, 70% is a distinction which is what I award them. They are worthy of commendation and we are very proud of them”.

The CCII PG reiterated the commitment of the apex body of all the socio-cultural organisations in Ibadanland to the completion of the ongoing new Olubadan Palace project at Oke-Are with a promise that the project would be completed very soon and that the current Olubadan would be the first monarch to occupy it.

Meanwhile, highlights of the programme which featured cultural dance and paying of homage to Kabiyesi by the various sections of the Aliiwo dynasty was the presentation of award of excellence to two prominent sons of Ibadan — Hon. Olaide Akinremi, the current House of Representatives member representing Ibadan North Federal Constituency and Mogaji Yerombi Oranyan, an Ibadan hinterland, Chief Oladiran Alabi Fajinmi.