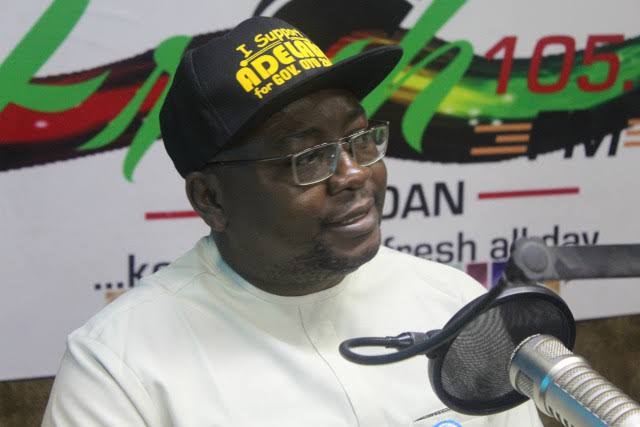 Omisore, Folarin, 3 Others Conspired To Rob Me Of APC Guber Ticket • It’s A Blessing In Disguise—Adelabu

Chief Adebayo Adelabu, the Accord party governorship candidate in Oyo State says conspiracy of five bigwigs in the party robbed him of the All Progressives Congress(APC) ticket in the state.

Adelabu gave the explanation during a radio programme tagged ‘Political Circuit’ monitored in Ibadan on Saturday.

Adelabu, a former CBN deputy governor was the APC governorship candidate in the 2019 general election in the state.

Adelabu had defected from the APC to Accord party, where he secured the governorship ticket, due to alleged irregularities in the broom’s party primary election.

Adelabu alleged that the five senators including the APC National Chairman, Abdullahi Adamu and Senate President, Ahmed Lawan, robbed him of the governorship ticket in the state.

The Accord governorship candidate explained that the five party chieftains conspired against him due to his relationship with Asiwaju Bola Tinubu and plan to install Lawan as APC presidential candidate.

Adelabu said that he withdrew from the APC primary election in the state due to clear departure from the tradition of the party and brazen illegality.

“Let me say categorically that I was robbed of the ticket because of my relationship with Asiwaju Bola Tinubu. Five Senators conspired to instal Lawan as APC presidential candidate.

“They installed Folarin knowing full well that I wont work against the candidature of Tinubu and anyone who emerges the governorship candidate will be in control of delegates from the state,” he said.

The Accord governorship candidate alleged that there was no APC governorship primaries in the state because it was conducted against the INEC rules.

According to him, the letter and notice given to INEC was that the primary election will take place on Thursday, May 26 at Obafemi Awolowo Stadium.

“At 6pm on that Thursday, the election was postponed, venue changed and additional venue was picked.

“This is illegal and not in consonance with the dictates of the Electoral Act 2022 as amended. Whoever emerges from the primary of the following day is illegal.”

Adelabu said that he informed Tinubu that he was leaving for Accord party, saying his relationship with Tinubu transcended politics.

The governorship said that his ouster from the APC had turned to be a blessing to him in disguise, adding Accord was the only alternative for the people of Oyo State.

He said that no fewer than 80 percent of the APC has joined them already in Accord, while several others have promised to join the party in due course.

Adelabu said that Accord today was enjoying massive support, adding the party has quality candidates vying for the 55 elective positions in the state.