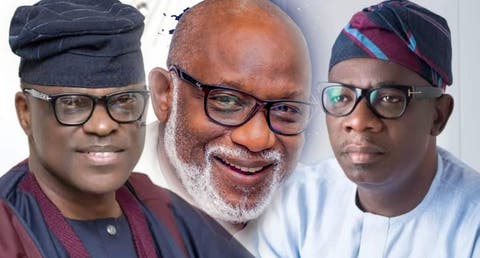 In few hours time, the people of Ondo State will be trooping out to exercise their civil responsibilities of electing the next governor of the state among the candidates of about 17 Political Parties.

Today’s election, no doubt, is a three-horse race between three major contenders who appeared to have the financial and Political strength to pull votes are the candidates of Zenith Labour Party, People Democratic party and the All Progressive Congress.

To go down the memory lane, the first 23 years of the 44 years of its existence, the state had produced 12 military governors/administrators, as well as two democratically elected governors.

The first democratically elected governor was the late Michael Adekunle Ajasin, who was elected on the platform of the Unity Party of Nigeria during the Second Republic. He governed the state for four years between 1979 and 1983.

The second democratically elected governor was the late Bamidele Olumilua, who was elected on the platform of the Social Democratic Party during the Third Republic.

He governed the state from January 1992 to November 1993, but he was forced to leave office when the military regime of the late General Sani Abacha took power.

Abacha ruled the country from November 1993 until his death on June 8, 1998. After his death, General Abdulsalami Abubakar became the head of state. He was the country’s last military ruler as he called for elections and transferred power to civilian government under ex-President Olusegun Obasanjo on May 29, 1999.

Between 1976 when the state was formed and 1999, it had 12 military governors/administrators, including the late Captain Ita David Ikpeme, who served between 1976 and 1978 during the military regime of General Olusegun Obasanjo (who later became President).

Those elected in the past 21 years of democratic rule were the late Chief Adebayo Adefarati (Alliance for Democracy), the late Olusegun Agagu (Peoples Democratic Party), Olusegun Mimiko (Labour Party), and the incumbent Governor Rotimi Akeredolu (All Progressives Congress).

Today’s poll will see the seventh governor being elected in the past 44 years of the state’s existence.

Although 17 parties fielded candidates for today’s election, there are only three main contestants, and analysts have predicted the poll will largely be a three-horse race.

The three parties are the ruling APC, PDP, and the Zenith Labour Party, with Akeredolu, Mr Eyitayo Jegede, and Deputy Governor Agboola Ajayi as the respective candidates.

Some political parties that initially showed interest in the election have also collapsed their structures to support the main candidates, particularly those of the PDP and the APC.

For instance, the chairmen of 11 parties, earlier in the week announced the decision of their parties to support the PDP candidate.

Despite that, Akeredolu, Jegede, and Ajayi are heavyweights in the governorship election as their structures spread across the 18 local government areas of the state. This is coupled with the fact that they were considered to have had the financial strength to run their campaigns when compared to other candidates.

Due to their popularity across the state, it is almost impossible to predict who will win among the three politicians.

Interestingly, the three candidates are from each of the three senatorial districts of the state. Akeredolu is from Ondo North, Jegede from Ondo Central, and Ajayi from Ondo South.

It was gathered that until the last minute of the campaign, the candidates were still gaining support in their respective strongholds, where they are expected to get large votes and miscellaneously get the constitutionally required number of votes from the other areas where they are less popular.

In spite of the closeness in the ratings of the trio, political observers have still managed to rate the chances of the three candidates across the 18 local government areas, though it is still difficult to ascertain who the winners will be in the areas.

During the campaign, it was observed that the three candidates were welcomed by their mammoth supporters. Their campaign venues were always full, which signified the popularity and acceptability of the candidates in the local government areas.

Though Odigbo Local Government Area is in the southern senatorial district, its inhabitants are mainly non-indigenes of the state. Besides being the third highly populated local government area in terms of voter registration, with over 120,000 registered voters, the local government area comprises mostly people from Osun and Kwara states, which are APC-controlled states.

In addition to that, with the perceived popularity of the PDP candidate among the people of Akure, coupled with the determination of his kinsmen to support him in this election, victory is also predicted for Jegede in the Akure North Local Government Area.

The Deputy Governor, Ajayi, is from the Ese Odo Local Government Area in the southern senatorial district. Being his local government area, his people would prefer to vote for their ‘son’ rather than an outsider.

He is also expected to win in Ondo West and Ondo East local government areas, owing to his backing by a former governor of the state, Dr Olusegun Mimiko, who is also the National Leader of the ZLP, in the election.

However, some political analysts have noted that Akeredolu may have an edge over the two other contestants, being a sitting governor.

In the effort to curb election violence, the Inspector-General of Police, Mr Mohammed Adamu, said the police had deployed over 33,000 officers and men.

Other security agencies have also prior to the election deployed their operatives, with the promise that the exercise would be violence-free.

This is as the Independent National Electoral Commission promised to ensure the election is conducted in a free, fair, and credible atmosphere.

The INEC Chairman, Prof Mahmoud Yakubu, said adequate preparation had been made to make sure every vote counted in the election.

The candidates in the election have also signed a peace accord and made a commitment that the poll would not be violent.

“The three candidates are expected to have enough votes from their senatorial district and strongholds, and at the end of the day, whoever has the majority of the votes cast will win the election,” he said.

“But the most important thing is for the election to be free and fair, and the people’s votes should count,” Abimbola added.