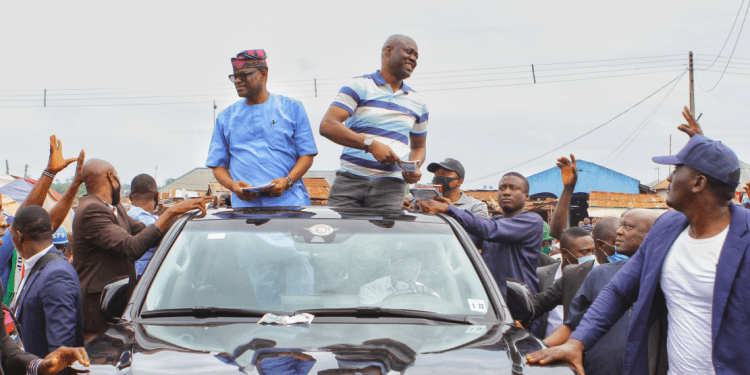 Few days to the October 10, 2020 governorship election in Ondo State, the Chairman, Peoples Democratic Party (PDP) Gubernatorial National Campaign Council for Ondo State, who is also the Governor of Oyo State, Engineer Seyi Makinde, has vowed that the party would prevent the APC from using violence to truncate the will of the people in the election.

Governor Makinde, who spoke on Sunday shortly after a meeting with the AIG and the Commissioner of Police in charge of the state, accused the ruling All Progressives Congress (APC) in Ondo State of masterminding electoral violence to subvert the will of the voters.

Governor Makinde appealed to the people of the state not to allow the violence being unleashed by the APC to affect their resolve to vote for the standard-bearer of the PDP, Mr. Eyitayo Jegede (SAN), urging them to send the APC and their representatives out of the Alagbaka Government House on Saturday.

The governor also called on security agencies in the state to step up the efforts to prevent the APC, which he accused of being desperate to retain Ondo State, from perpetrating further violence ahead of the poll.

A statement by the Chief Press Secretary to Governor Makinde, Mr. Taiwo Adisa, quoted the governor as saying that while the PDP and its candidate, Jegede, had been working hard to convince the electorate, by running issue-based campaigns and pointing out how the APC’s Governor Rotimi Akeredolu has brought untold hardship upon the people, the ruling party has been busy unleashing violence on PDP members.

He added that the ruling party has shown desperation to retain the state despite failing the people.

Governor Makinde said: “We have been working hard in support of our candidate and our great party the People’s Democratic Party (PDP) for the past months, and it all comes down to one day: October 10, 2020. “The PDP as a party and our candidate, Eyitayo Jegede SAN, have run an issue-based campaign. “The issues are clear:

The APC led administration has brought their characteristic pain and suffering upon the people of Ondo State. And the people have decided it is time for them to go.

“However, we have noticed how in the past few weeks, our supporters have become targets of violent attacks from APC thugs. First, there was an attack on the campaign train of our candidate at Akoko. Followed by the ambush at Irele. He was held hostage and nearly prevented from entering the town. And then there were the shootings at Owo.

“Between yesterday and today, there have been skirmishes reported in Akure. The APC has shown that their ambition to hold on to government is more important than securing the lives of the good people of Ondo State.

“They are willing to set Ondo State on fire if that is what it would take for them to retain Alagbaka.

“This is not the first time the APC would use threats and intimidation to try to keep citizens from exercising their civic rights. We have seen this play out in other states and elections. It may have taken us by surprise at other times, but not this time. The PDP is ready and prepared to make use of all state apparatus to ensure that the will of the people is not subverted.

“We will not sit back and watch our supporters, and indeed any of the electorates intimidated and harassed. We will use all legal means at our disposal to ensure that our people are safe.

“We, therefore, appeal to the good people of Ondo State to not allow the threat unleashed by the APC to affect their resolve.

“I call on all security agencies in Ondo State not to allow themselves to be used as a tool against the will of the people.

“We commend you for all you have done so far providing the needed support and security for our candidate and our people. We urge you to do more.

“Don’t forget that history and posterity have never been kind to anyone who allowed themselves to be used as a tool for injustice. We urge you to read the mood of the people and act accordingly. Politicians may come and go, but the people will always remain. Remember, the world is watching.”

The governor further said that results of different polls, which indicated that the PDP will unseat the ruling party, were the reasons it has resorted to violence, warning the Ondo State electorate to remain strong in their resolve to vote for Jegede.

“We must remain unequivocal in our resolve. Evil should never be allowed to conquer. We have democracy and all the democratic systems on our side. We will not be afraid. We will not be deterred. We will march on until victory is ours,” he said.